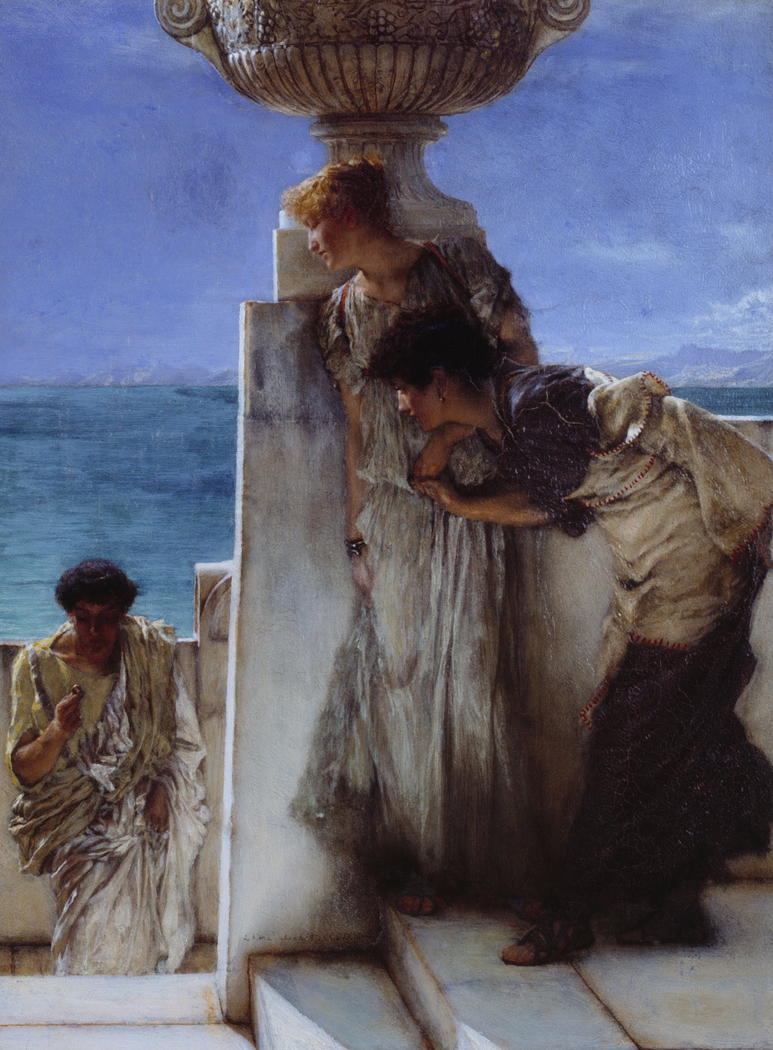 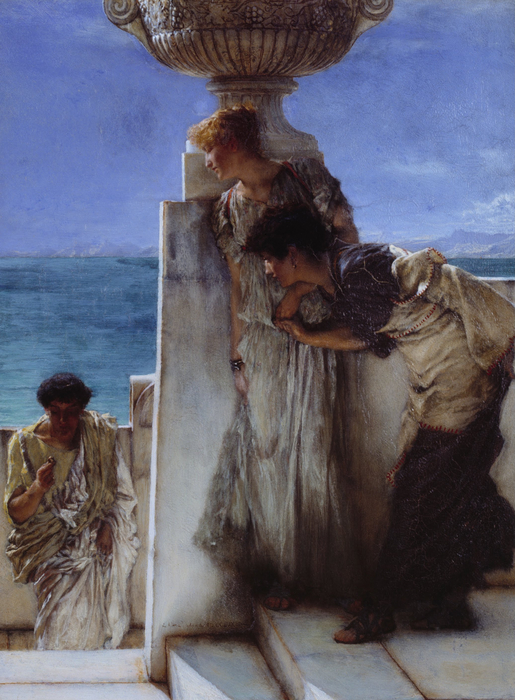 1885
A Foregone Conclusion was commissioned by the founder of the Tate Gallery, Sir Henry Tate (1819-1899) as a wedding present for his second wife, Amy Hislop. Set in the time of the early Roman Empire, Alma-Tadema depicts a man bringing an engagement ring to his girlfriend in the hope that she will become his fiancée. The expectant look of the lady and her attendant holding hands at the top of the stairs reveals that the result of his proposal will be ‘a foregone conclusion’. Barrow has examined many of Alma-Tadema’s courtship scenes in the light of Roman law and practice. During this period women of high birth often married while they were young for political alliance and social advantage. ‘Love interests’, Barrow remarked, ‘developed through the illicit acquisition of lovers after marriage’ (Barrow, p.102). It is unlikely, however, that Henry Tate, a self-made businessman, would have taken the painting to mean anything other than that which was clearly intended, a compliment to his wife’s affection. Amy Hislop, who was 31 years his junior, was married to Tate in 1885, the year of this painting.

This painting is typical of many of Alma-Tadema’s works from the latter part of his career. In contrast to his illustrations of historical events painted on a large scale, for example An Audience at Agrippa’s (1875), his pictures from the 1880s onwards are generally small scale domestic and sentimental scenes. In addition, although still using a Roman setting, Alma-Tadema includes fewer recognisable statues and artefacts. In 1863 Alma-Tadema had visited Italy, going for the first time to the ancient sites of Pompeii and Herculaneum. He frequently returned, taking photographs which became the source material for his paintings when he was back in his studio in London. His later pictures, however, usually contained no more than ‘a figure, or two figures, seated on a marble bench or semi-circular exedra, with the sea beyond, and flowers to add a note of colour’ (Wood, p.125). By including these features in this painting Alma-Tadema recreates the Italian setting.

By the time Alma-Tadema painted A Foregone Conclusion he had risen to prominence in the Victorian art world. He was elected a Royal Academician in 1879 and, three years later, a major exhibition was held of his work at the Grosvenor Gallery. Four years after this painting was completed, Sir Henry Tate commissioned A Silent Greeting (Tate N01523) as a companion picture.

Size:
311 cm (122.4 in) x 229 cm (90.2 in)
Medium:
Oil on panel
License:
This photographic reproduction is in the public domain (Wikimedia Commons)
For more:
https://commons.wikimedia.org/wiki/File:Sir_Lawrence_Alma-T…