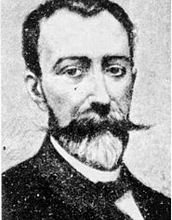 Jose Etxenagusia Errazkin or, in Spanish, José Echenagusía Errazquin (1 February 1844, Hondarribia - 31 January 1912, Rome) was a Basque genre and Orientalist painter.
After displaying an early talent for art, he began his studies at the Royal Seminary in Bergara, aged only fourteen.
He was strongly influenced by the works of Giambattista Tiepolo and began producing historical scenes of soldiers and courtiers. Later, he came under the influence of the Nazarene movement.
[Source]
more >
2