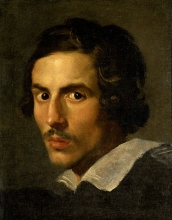 "Rare man, sublime artificer, born by Divine Disposition and for the glory of Rome to illuminate the century," wrote Maffeo Barberini, Pope Urban VIII, of the great Baroque sculptor Gian Lorenzo Bernini (b. 1598, Naples, Italy - d. 1680 Rome). Born in 1598 in Naples, Bernini was a child prodigy, receiving his early training in sculpture from his father and completing his first bust at the age of ten. He arrived in Rome at the age of seven and there built his extraordinary career.

Bernini was an astonishingly prolific artist, receiving both sculptural and architectural commissions from royalty across Europe; he also painted and wrote comedies. Admiring his tremendous energy, a contemporary recorded that "Bernini... gave a public opera wherein he painted the scenes, cut the statues, invented the engines, composed the music, wrote the comedy, and built the theater."

Only at the age of sixty-six did Bernini leave his beloved city of Rome when summoned by Louis XIV to France for six months. Throughout this trip the famous artist was treated royally, more as a hero or prince than a craftsman. When Bernini died in 1680 at the age of eighty-two, he was buried with great pomp in Rome and mourned by all of Europe.