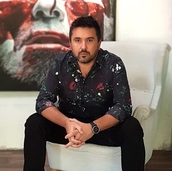 Eugen Varzic graduated from the Academy of Applied Arts in Rijeka in 1999. He has exhibited at about 30 solo exhibitions and at more than a hundred group exhibitions at home and abroad. For his art artistic creativity has been rewarded several times. He has conducted various art projects and collaborated on international art projects. He specializes in painting in Madrid, working with Eloy Morales and Antonio Garcia Lopez.
His artistic works are in many public and private venues and in private collections throughout Croatia and the world, as well as in sacral venues.
He is the author of two public sculptures made in mosaic technique, Trosjed and Konfin, set in Poreč, and wall paintings of “Marino Cettina” in Umag.
He is included in lexicons and guides of modern and contemporary art, in Italy and Spain. As one of the five art artists from the Republic of Croatia in 2008, his work entitled Eve (Enfer et Paradis) is included in the Leksikon of Fantastic and Contemporary Art of Europe, by Gerhard Habarte. The same art work was included in the permanent exhibition of the Museum of Fantasy Art in Vienna.
She occasionally deals with design, illustration and painting of paintings, conducting art workshops and individual visual arts of future students of high art schools.
At the first TEDxPula conference in Istria, he held a speech titled Art as Breathing.
As a free artist he lives and works in Istria, Croatia.
more >
38