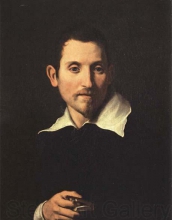 Domenichino (b. 1581, Bologna, Italy - d. 1641, Naples, Italy) spent half his life battling against the increasingly fashionable exuberant Baroque style of Giovanni Lanfranco and Pietro da Cortona. When a friend encouraged him to accommodate others' taste, he replied, "I work for myself alone and for the perfection of Art." Domenichino's sensibility, subtle composition, and delicate color heavily influenced Nicolas Poussin. The most classical Bolognese painter of his era, Domenichino sought the ideal form and grandeur known as disegno.

After studying with a Flemish artist, Domenichino switched to the Carracci academy's classical instruction, then assisted Lodovico Carracci. In 1602 he joined Annibale Carracci and his classmates Guido Reni and Lanfranco, his detested rival, working on the Farnese Palace's ceiling murals. Domenichino painted many of the landscapes, ordering and improving on nature. By 1614 he was Rome's leading painter. He also made easel pictures, sometimes painting on copper to achieve a polished finish. In 1621 he began working as architect for Pope Gregory XV, creating frescoes with a more emotional Baroque style.

In 1631, with his popularity in Rome waning, Domenichino traveled to Naples to take over Guido Reni's commission to decorate a chapel in the Naples Cathedral. This was a potentially dangerous project: other non-Neapolitan artists had refused or abandoned this commission after jealous local artists threatened their lives and killed a servant of Reni's. In 1641 Domenichino died with the project unfinished, and Lanfranco succeeded him.