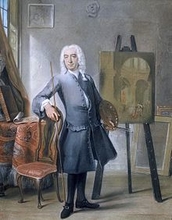 Cornelis Troost (1696-1750)
Born in Amsterdam, painter Cornelis Troost was the son of a bookkeeper and an actress. The young Troost seemed destined for a stage career: he acted at Amsterdam’s Schouwburg theatre from 1719 to 1724. Yet from 1723, his focus was painting. It was in that year that he became an apprentice to portraitist Arnold Boonen. Troost emerged as one of the leading Dutch artists of the 18th century. At first, he mostly painted portraits; in his later paintings the subject was often a scene from a theatre play. In the 1740s, he painted numerous military scenes. Troost lived in Amsterdam his entire life. He was buried at the city’s Nieuwe Kerk.
[Source]
more >
1