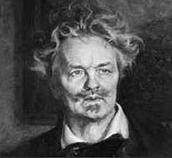 Johan August Strindberg (22 January 1849 – 14 May 1912) was a Swedish playwright, novelist, poet, essayist and painter. A prolific writer who often drew directly on his personal experience, Strindberg's career spanned four decades, during which time he wrote over sixty plays and more than thirty works of fiction, autobiography, history, cultural analysis, and politics. A bold experimenter and iconoclast throughout, he explored a wide range of dramatic methods and purposes, from naturalistic tragedy, monodrama, and history plays, to his anticipations of expressionist and surrealist dramatic techniques. From his earliest work, Strindberg developed innovative forms of dramatic action, language, and visual composition. He is considered the "father" of modern Swedish literature and his The Red Room (1879) has frequently been described as the first modern Swedish novel.

In Sweden, Strindberg is known as an essayist, painter, poet, and especially as a novelist and playwright, but in other countries he is known mostly as a playwright.

The Royal Theatre rejected his first major play, Master Olof, in 1872; it was not until 1881, at the age of thirty-two, that its première at the New Theatre gave him his theatrical breakthrough.[2][10] In his plays The Father (1887), Miss Julie (1888), and Creditors (1889), he created naturalistic dramas that – building on the established accomplishments of Henrik Ibsen's prose problem plays while rejecting their use of the structure of the well-made play – responded to the call-to-arms of Émile Zola's manifesto "Naturalism in the Theatre" (1881) and the example set by André Antoine's newly established Théâtre Libre (opened 1887). In Miss Julie, characterisation replaces plot as the predominant dramatic element (in contrast to melodrama and the well-made play) and the determining role of heredity and the environment on the "vacillating, disintegrated" characters is emphasized. Strindberg modeled his short-lived Scandinavian Experimental Theatre (1889) in Copenhagen on Antoine's theatre and he explored the theory of Naturalism in his essays "On Psychic Murder" (1887), "On Modern Drama and the Modern Theatre" (1889), and a preface to Miss Julie, the last of which is probably the best-known statement of the principles of the theatrical movement.

During the 1890's he spent significant time abroad engaged in scientific experiments and studies of the occult. A series of psychotic attacks between 1894 and 1896 (referred to as his "Inferno crisis") led to his hospitalization and return to Sweden. Under the influence of the ideas of Emanuel Swedenborg, he resolved after his recovery to become "the Zola of the Occult". In 1898 he returned to play-writing with To Damascus, which, like The Great Highway (1909), is a dream-play of spiritual pilgrimage. His A Dream Play (1902) – with its radical attempt to dramatize the workings of the unconscious by means of an abolition of conventional dramatic time and space and the splitting, doubling, merging, and multiplication of its characters – was an important precursor to both expressionism and surrealism. He also returned to writing historical drama, the genre with which he had begun his play-writing career.[18] He helped to run the Intimate Theatre from 1907, a small-scale theatre, modeled on Max Reinhardt's Kammerspielhaus, that staged his chamber plays (such as The Ghost Sonata).