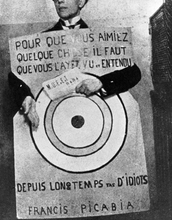 As a medical student, Breton was interested in mental illness; his reading of the works of Sigmund Freud (whom he met in 1921) introduced him to the concept of the unconscious. Influenced by psychiatry and Symbolist poetry, he joined the Dadaists. In 1919 with Louis Aragon and Philippe Soupault, he cofounded the review Littérature; in its pages, Breton and Soupault published “Les Champs magnétiques” (1920; “Magnetic Fields”), the first example of the Surrealist technique of automatic writing. In 1924 Breton’s Manifeste du surréalisme defined Surrealism as “pure psychic automatism, by which it is intended to express . . . the real process of thought. It is the dictation of thought, free from any control by the reason and of any aesthetic or moral preoccupation.” Surrealism aimed to eliminate the distinction between dream and reality, reason and madness, objectivity and subjectivity. Breton’s novel Nadja (1928) merged everyday occurrences with psychological aberrations. L’Immaculée Conception (1930), written with Paul Éluard, attempted to convey a verbal impression of different types of mental disorder. Les Vases communicants (1932; “The Communicating Vessels”) and L’Amour fou (1937; “Mad Love”) explored the connection between dream and reality. Breton also wrote theoretical and critical works, including Les Pas perdus (1924; “The Lost Steps”), Légitime Défense (1926; “Legitimate Defense”), Le Surréalisme et le peinture (1926; “Surrealism and Painting”), Qu’est-ce que le surréalisme? (1934; What is Surrealism?), and La Clé des champs (1953; “The Key to the Fields”).

The Surrealist movement eventually became politically involved in the ferment of the 1930s, and Breton and several colleagues joined the Communist Party. His second Surrealist manifesto, published in 1930, explored the philosophical implications of Surrealism. Breton broke with the Communist Party in 1935 but remained committed to Marxist ideals. During the German occupation of France, Breton escaped to the United States. In 1942 at Yale University he organized a Surrealist exposition and issued yet another Surrealist manifesto. In 1946 Breton returned to France, where, the following year, he produced another Surrealist exhibition. His Poèmes appeared in 1948 in Paris, and Selected Poems was published in London in 1969.
source: Encyclopaedia Britannica