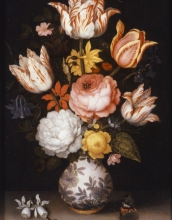 Bosschaert (1573 - 1621) was born in Antwerp but he and his family were among the many Protestant refugees who fled to the north. They settled in Middelburg in Zeeland in about 1587.

He had begun his training in Antwerp and joined the Middelburg guild as a master in 1593. He specialised in painting precise flower and fruit still-lifes in the manner of botanical illustrations but grouped in compositions which carefully balance form and colour.

Both his brother-in-law Balthasar van der Ast and his three sons, Ambrosius the Younger, Johannes and Abraham, were trained by him. Bosschaert moved to Breda in 1619. In 1621 he travelled to The Hague to deliver a flower vase which he had designed to the Prince of Orange's Chamberlain. He died there that year.