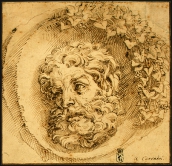 Agostino Carracci (or Caracci) (16 August 1557 – 22 March 1602) was an Italian painter and printmaker. He was the brother of the more famous Annibale and cousin of Lodovico Carracci.

He posited the ideal in nature, and was the founder of the competing school to the more gritty view of nature as expressed by Caravaggio. He was one of the founders of the Accademia degli Incamminati along with his brother, Annibale Carracci, and cousin, Ludovico Carracci. The academy helped propel painters of the School of Bologna to prominence.