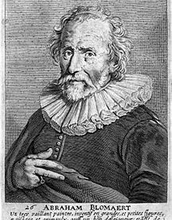 Abraham Bloemaert (1564-1651)
As a child, Bloemaert moved with his family from Gorinchem to Utrecht. He was apprenticed to no less than five different masters, among them his father Cornelis Bloemaert I. Having travelled to Paris and Amsterdam, in 1593 Bloemaert returned to Utrecht. There he was to remain for the rest of his life. Abraham Bloemaert acquired a name for his paintings of mythological and religious subjects. Bloemaert - a pious Catholic in the Protestant Northern Netherlands - received numerous commissions from the Catholic Church. Bloemaert’s early paintings feature the exaggerated, elongated and muscular figures of mannerist art. In the 1620s, when his career was at its height, his style began to change. Influenced by his pupils, including Gerard van Honthorst and Hendrick ter Bruggen, he painted a number of works in the Caravaggist manner.
more >
8