Church of the Eremitani 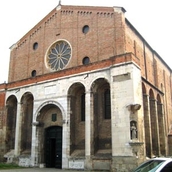 It was built in 1276 and dedicated to the saints Philip and James; it is however best known as degli Eremitani from the annexed old monastery, which now houses the municipal art gallery.

The chapel of SS. James and Christopher (Ovetari Chapel), formerly illustrated by Mantegna's frescoes, was largely destroyed by the Allies in World War II, because it was next to a German headquarters. There are more than 88000 fragments covering only 77 m2, while the original area covered several hundreds. Other artists whose frescoes are preserved in the church include Guariento and Ansuino da Forlì.

The church contains the tombs of Jacopo II da Carrara (d.1351) and Ubertino da Carrara (d.1345) da Carrara, lords of Padua, both by Andriolo de Santi (de Sanctis) and others. They were formerly in the church of Sant'Agostino, but were moved here after that church was razed in 1819. [source]
more >
1