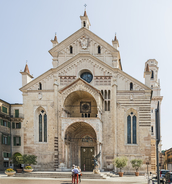 It was erected after two Palaeo-Christian churches on the same site had been destroyed by an earthquake in 1117. Built in Romanesque style, the cathedral was consecrated on September 13, 1187. The structure was later modified by several renovation interventions, although the plan has remained unchanged. [source]
more >
1