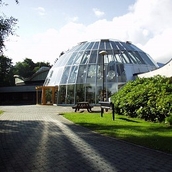 Stavanger Art Museum’s roots extend back to the art society Stavanger kunstforening and its faste galleri – an gallery with its own permanent art collection. This collection began on 11 February 1865, when consul Jens Z. Kielland became chairman of the new art society. Kielland was an amateur painter and the father of Kitty and Alexander Kielland. The society’s main aim was to establish an art collection:

§ 1 The art society’s goal is to awaken a love of art and over time to build an art collection which belongs to the society.
During the 1800s, works by artists such as Lars Hertervig, Kitty Kielland, Hans Gude, Olav Lange, Knut Baade, Harriet Backer, Carl Sundt-Hansen and Christiane Schreiber entered the collection. The art society had no fixed premises until 1893. It then installed itself in rooms on the ground floor of Stavanger Museum. In 1915 the museum found it needed those rooms itself, so the society built temporary premises on property purchased on the road Madlaveien. The building now on Madlaveien was erected ten years later.

In 1915 the collection contained 45 works; by 1935 it had increased to 165, and in 1966 to 354. This growth was due largely to gifts and purchases made with support from legacies. In 1966, when the local government took over responsibility for the collection, it received the status of a foundation: Stavanger Faste Galleri. After 1966 the gallery and art society were two separate institutions with each their own leaders and directorial boards.

In 1990 Stavanger Faste Galleri was re-named Rogaland kunstmuseum (Rogaland Museum of Fine Arts), and then in 2010 Stavanger kunstmuseum. When the museum moved to its current premises in the park Mosvannsparken, the collection contained 1,429 works. Today it has over 2,600 works. Chief among these are Norway’s largest Lars Hertervig-collection and a steadily increasing number of paintings by Kitty Kielland. [source]
more >
2