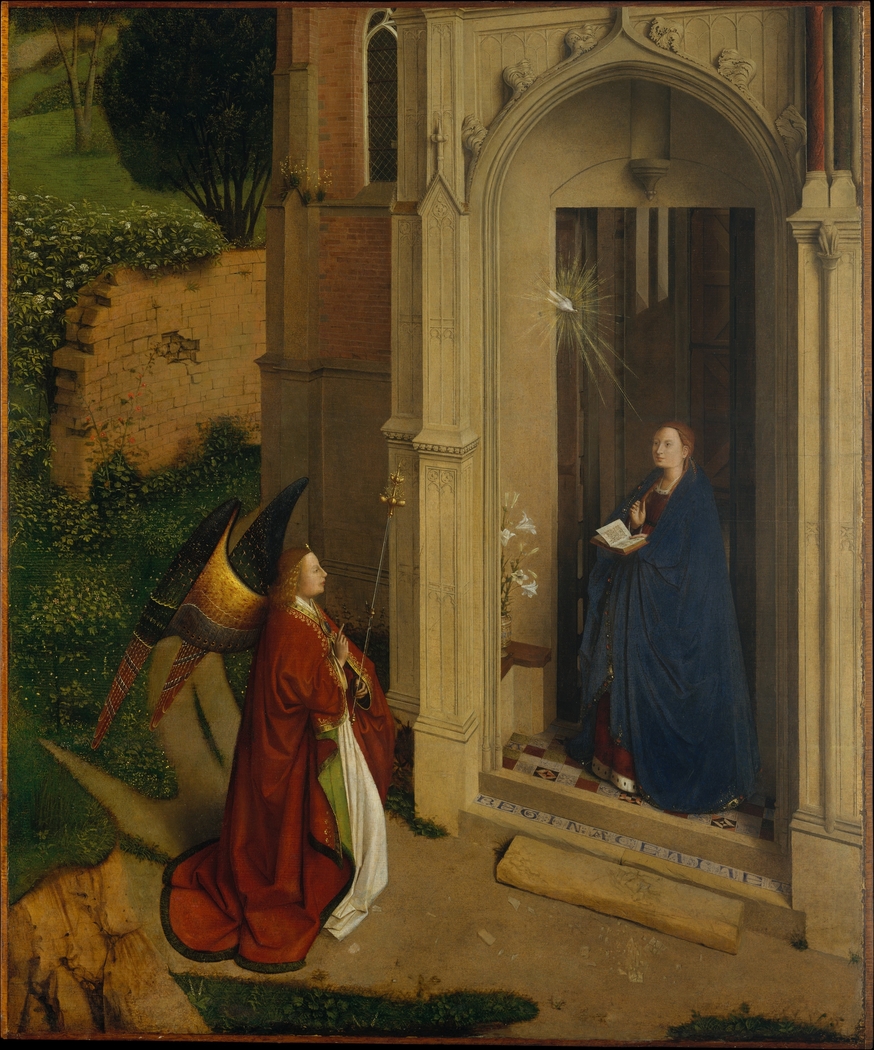 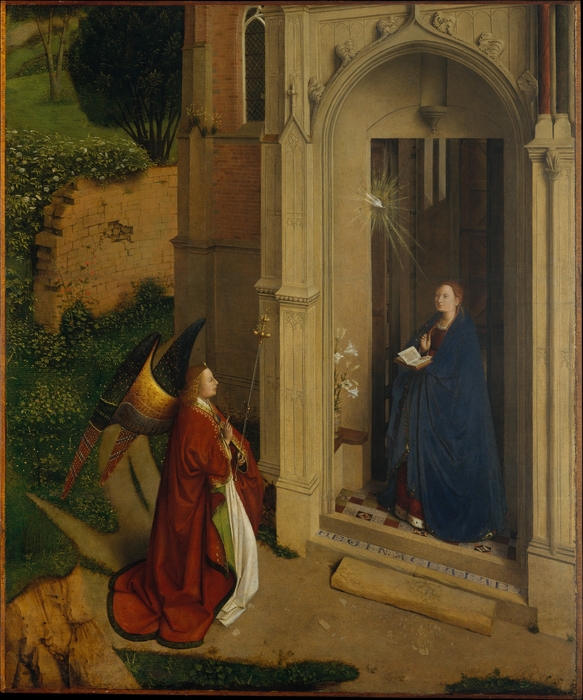 This Annunciation is exceptional for its bird’s-eye view and outdoor setting. Sheltered in the doorway of a church and greeted by Gabriel, Mary is presented not only as the recipient of the message of the Incarnation, but also as the personification of the Church (Ecclesia). The architecture, which is part Romanesque (right) and part Gothic (left), refers to the coming of Christ and the transition from Judaism to Christianity. A fragment of a larger composition, the picture is notable for its meticulous observation of plant life and was formerly ascribed to Van Eyck.

This Annunciation departs from conventional depictions in early Netherlandish painting: the outdoor setting, bird’s-eye point of view, and the positioning of the Virgin in a doorway are unusual features. This has led to much scholarly debate, most famously between Erwin Panofsky (1935) and Hermann Beenken (1937), regarding the attribution of the painting. At various points, the work has been ascribed to Jan van Eyck, Hubert van Eyck, and Petrus Christus. As Annunciation scenes of the fifteenth century were usually set in domestic surroundings, the outdoor view initially led some scholars to assign to this painting an early date, more in keeping with the lifetimes of the two Van Eyck brothers. However, the painting demonstrates characteristics of both the Eyckian style and the work of Petrus Christus, and does not neatly fit into the oeuvre of either. While the delicacy and naturalism of the many identifiable plants are familiar from Jan van Eyck’s work, the bulkiness of the cone-shaped figures is more in keeping with Christus’s known paintings.

Further complicating attempts at attribution is the fact that this painting is a fragment of a larger, horizontally-oriented composition. The only original edge is at the right, while the top, bottom, and left edges have been cut (Ainsworth 1994 and 2001). The panels of this painting are arranged horizontally, quite unusual for a vertically-oriented composition. This suggests that the painting may have been quite a bit wider, even as much as twice its current width, and have included other scenes from the life of the Virgin (Ainsworth 1994). The attribution question is also hampered by the condition of the painting, which is abraded, particularly in the faces of the Virgin and Gabriel. Technical examination done for the 1994 exhibition "Petrus Christus: Renaissance Master of Bruges" indicated that an attribution to Petrus Christus was the most likely. The underdrawing is in a liquid medium, applied with a fine pen or brush in a close network of feathery strokes that is typical of Christus’s known style. Equally characteristic of Christus’s execution are the ruled lines that extend beyond the architectural features that they describe. Finally, dendrochronology performed by Peter Klein (1994) definitively demonstrated that the panel could not have been used until well after Hubert van Eyck’s death in 1426, and is most likely to have fit into the lifetime of Christus, around 1442. Maryan Ainsworth (1994) suggests that this painting is an example of Christus’s early work, possibly under the influence of Jan van Eyck’s designs, and before he had learned one-point perspective. Read more...

Notes:
According to Kleinberger records, "an extract on the back of the picture" stated that it was in the collection of Prince de Charleroi / Duc de Bourgogne [unidentified]. This extract is no longer on the reverse of the painting and cannot be found. In a 1926 receipt from Kleinberger Galleries to Michael Friedsam it is stated that the picture was "painted for the Prince de Charleroi, Duc de Bourgogne."

License:
Courtesy of the Metropolitan Museum of Art
For more:
https://www.metmuseum.org/art/collection/search/435899