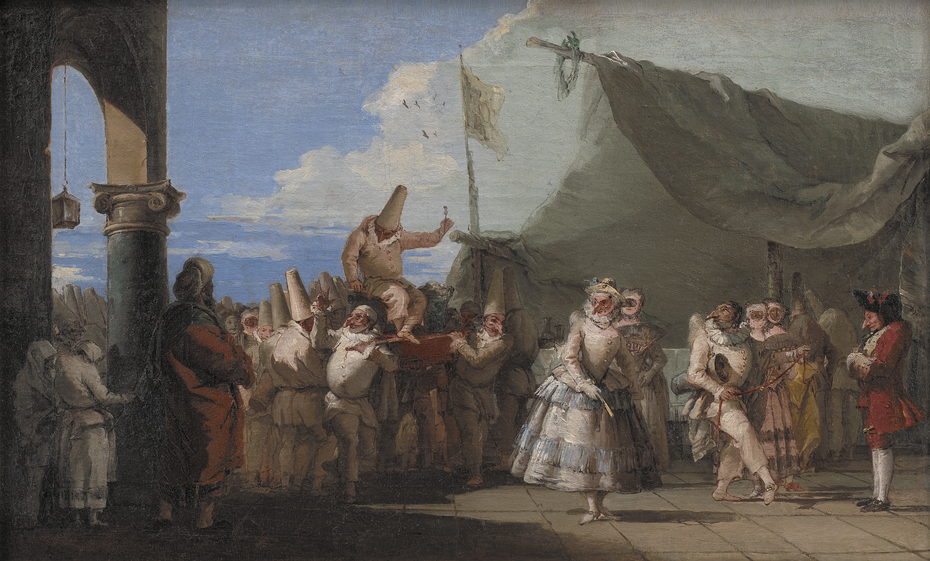 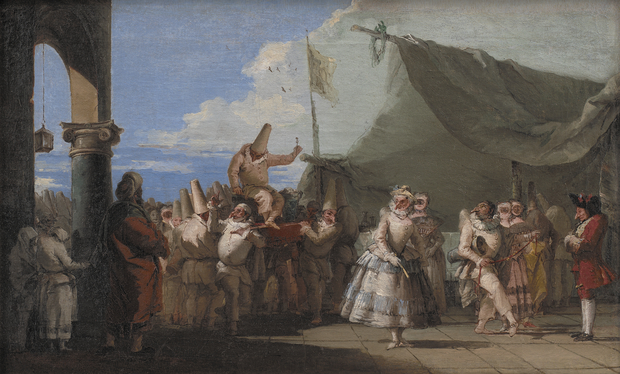 The Triumph of Pulcinella

1753 - 1754
The art of 18th-century Venice was created in a city that had lost its international political significance, but which still continued its traditions for splendid ceremonies and parties from its past days of glory.

The parties included the annual carnival with its costumed crowds and unrestrained behaviour.

The theater character Pulcinella
The Triumph of Pulcinella is a series of paintings originally consisting of four paintings that deal with the carnival and its gallery of musicians, street performers, and quacks. Pulcinella, the original Mr. Punch, is a character from the Italian commedia dell’arte and is easily recognised by his fat, hunchbacked physique, large nose, and conical hat. In Tiepolo’s works he appears in several “cloned” versions that take part in mirth-provoking or slapstick scenes. The artist’s fascination with the figure is borne out by the 104 drawings of scenes from the life of Pulcinella that he did under the heading Entertainment for Children.

Poking fun at the triumphal entries
The Triumph of Pulcinella pokes fun at triumphal entries familiar from traditional ceremonies where the triumphator is the centre of attention. This ceremony is also familiar from traditional historical painting, but here it has been caricatured with the ample figure of Pulcinella carried by his brother while other characters from commedia dell’arte look on.

License:
Courtesy of the National Gallery of Denmark
For more:
http://www.smk.dk/en/explore-the-art/highlights/giovanni-do…