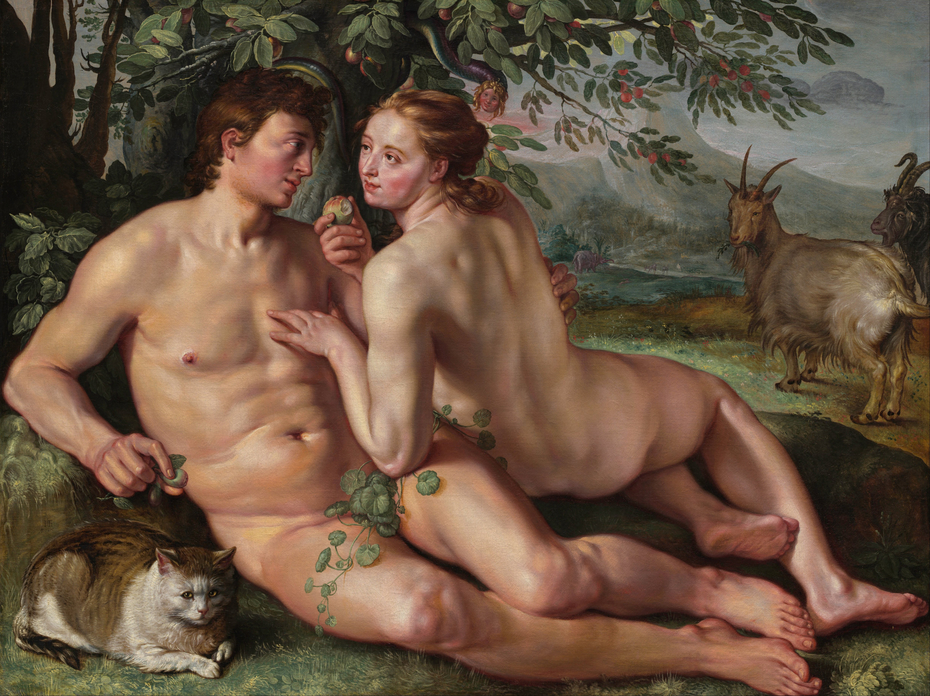 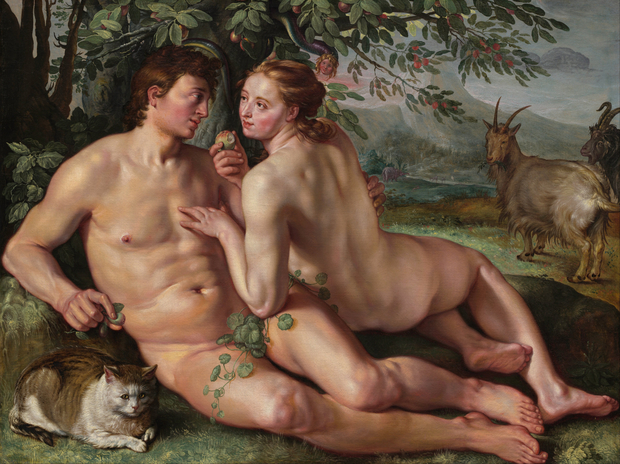 The Fall of Man

1616
In about 1600, Hendrick Goltzius, who was famous across Europe for his extraordinary abilities as a draftsman and printmaker, turned his talents to painting. In 1616 he painted this magnificent image of Adam and Eve reclining in the Garden of Eden like mythological lovers. By placing the almost life-size figures so close to the front of the picture plane, Goltzius entices the viewer to become emotionally engaged in this biblical narrative. Traditionally, images of the Fall emphasize shame, punishment, and the origins of humanity’s mortality, but Goltzius has chosen to present the event as a seduction based on physical attraction. Eve, with her back to the viewer, has already taken the first bite of the apple and turns with a knowing gaze toward Adam, who is utterly mesmerized by his companion.

Animals provide symbolical commentary. The serpent’s sweet female face represents the deceptiveness of appearances. The elephant in the distant field refers to the Christian virtues of piety, temperance, and chastity and serves as a symbolic contrast to Adam’s weakness of the flesh and infidelity to God. Goltzius included two goats, sometimes symbols for Eve, signifying a lack of chastity. The cat, representing the unjust judge, solemnly reminds viewers not to enjoy what they should condemn, lest they too cause more harm than good. Through these many symbolic references Goltzius suggests that humanity’s fall from grace is tied to Adam and Eve’s inability to restrain their physical appetites. The work exists within the classicist tradition, yet with this lavish painting Goltzius created an early example of what would be called the baroque style, a naturalistic manner of representation that depends upon the viewer’s empathetic response to fulfill its meaning.

License:
Courtesy of the National Gallery of Art, Washington
For more:
https://www.nga.gov/collection/art-object-page.95659.html