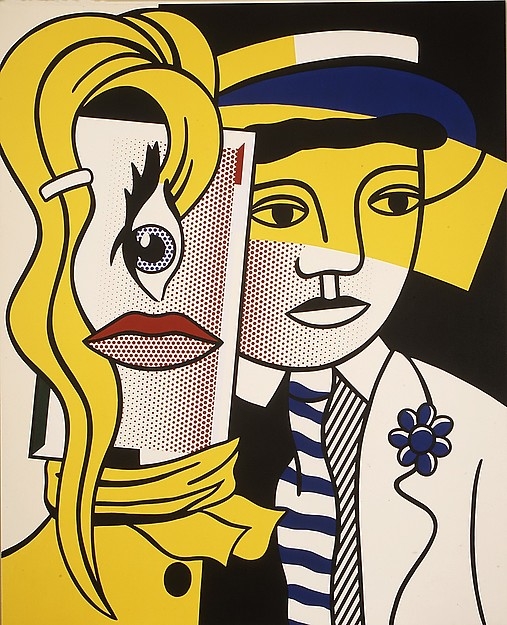 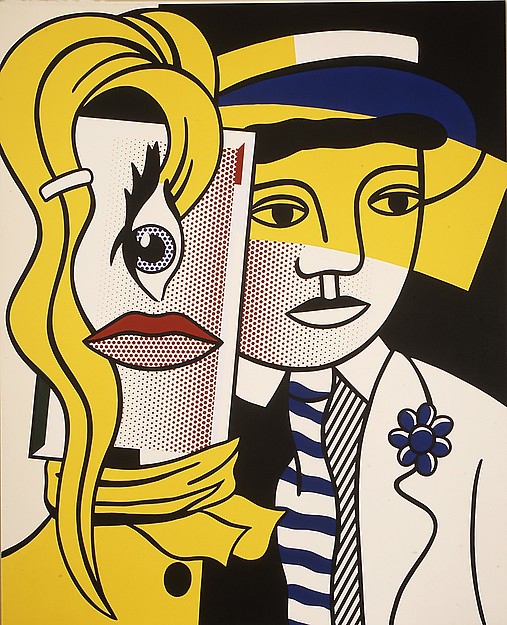 1978
To many people, Roy Lichtenstein's paintings based on comic strips are synonymous with Pop Art. These depictions of characters in tense, dramatic situations are intended as ironic commentaries on modern man's plight, in which mass media — magazines, advertisements, and television — shapes everything, even our emotions. Lichtenstein also based paintings on well-known masterpieces of art, perhaps commenting, as did Andy Warhol in his "Mona Lisa," on the conversion of art into commodity. Like Warhol, Lichtenstein, who had an art-school background, also worked as a commercial artist and graphic designer (1951–57), an experience that influenced the subject matter of his later paintings. Lichtenstein's fame as a Pop artist began with his first one-man exhibition, at the Leo Castelli Gallery in New York in 1962, and continued to characterize his career throughout his life.

"Stepping Out" is marked by Lichtenstein's customary restriction to the primary colors and to black and white; by his thick black outlines; and by the absence of any shading except that provided by the dots imitating those used to print comic strips. Yet beneath the simplicity of means and commonplace subject matter lies a sophisticated art founded on a great deal of knowledge and skill. Lichtenstein here depicts a man and woman, side by side, both quite dapperly dressed. The male is based on a figure in Fernand Léger's painting "Three Musicians" of 1944 (Museum of Modern Art, New York), but seen in mirror image. He wears a straw hat, high-collared shirt, and striped tie; the flower in his lapel is borrowed from another Léger painting. The female figure, with her dramatically reduced and displaced features, resembles the Surrealistic women depicted by Picasso during the 1930s. Her face has been reduced to a single eye set on its side, a mouth, and a long lock of cascading blond hair.

The composition of "Stepping Out" is complex and rather elaborate. The figures, while quite different in appearance and style of dress, are united through shape and color: the sweeping curve of the woman's hair is answered by the curve of her companion's lapel; the diagonal yellow of the end of her scarf is echoed in the yellow rectangle that covers the top of his face; the red Benday dots cover half of both faces; and the black that serves as background for the man invades the area behind the woman. (Source: The Metropolitan Museum of Art)