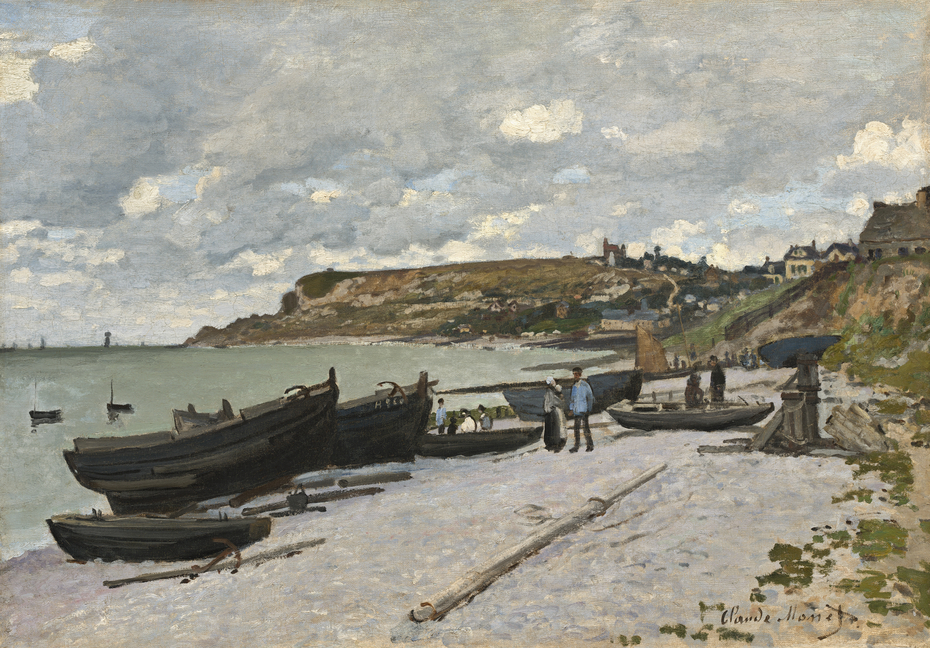 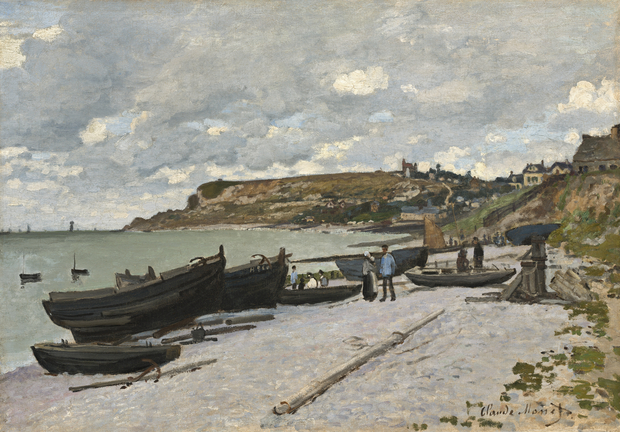 1867
In June 1867, at the urging of his father, Claude Monet went to Sainte- Adresse, a popular resort town on the Normandy coast, for an extended stay in the home of his aunt, Sophie Lecadre. His visit lasted until near winter and proved to be a period of intense activity. "I have my work cut out for me," Monet wrote to his friend and fellow painter Frédéric Bazille shortly after his arrival. "I have about 20 canvases well underway, some stunning seascapes and some figures and gardens, everything in short." Sainte-Adresse is one of the most striking paintings within this important group of works. In contrast to the majority of seascapes Monet produced at this time, which depict the beach facing southward in the direction of Le Havre, Sainte-Adresse shows the beach facing north toward the cape of La Cape of La Hèveat Low Tide (Kimbell Art Museum, Fort Worth), which he exhibited in the Salon of 1865. In Sainte-Adresse, painted two years later, the view has been altered in small yet significant ways: the horizon line has been raised and the cape centered within the composition, giving greater prominence to the beach in the foreground. In addition, the inclusion of boats and the houses in the middle ground make the site look less desolate than in the earlier depictions. The accompanying figures, rather than being dwarfed by the vastness of the surrounding landscape, reside comfortably within it. In stylistic terms, this painting is consistent with the seascapes Monet produced during the summer and fall of 1867. There is a new awareness of the particular atmospheric character of the scene, reflecting Monet's growing acuity as a landscape painter. The overcast day is skillfully captured through the grayish tonalities of the sky, the water, and the beach. A stronger emphasis is also given to the paint surface, with rapidly applied touches of color that help characterize rather than carefully delineate the scene. The relative simplicity of the composition, the elimination of detail, and the fresh, varied quality of the brushwork all suggest that this painting may have been executed at least in part on site rather than entirely in the studio. The most salient characteristic, however, is the treatment of the subject itself. Although Sainte-Adresse was a resort suburb, located four kilometers northwest of Le Havre, Monet makes no allusion in the painting to the influx of tourists who visited the Normandy coast every year. As in The Beach at Sainte-Adresse (Art Institute of Chicago), also painted in 1867, in this painting the gray skies, the shoreline studded with small fishing boats, and the presence of the fishermen standing on the beach all seem to suggest the fall months, after the departure of the tourists. These two paintings of quotidian scenes contrast noticeably with Regatta at Sainte-Adresse (Metropolitan Museum of Art, New York), in which well-dressed tourists sit on the beach, watching the white sails of pleasure craft in the harbor on a clear summer day. With the generous bequest of Catherine Gamble Curran, Sainte-Adresse has now been fully acquired by the National Gallery of Art. In this painting, Monet chose to celebrate a world rarely seen by tourists, but with which the artist had a long and intimate acquaintance. Joining careful observation of place and season with the perceptive portrayal of everyday life on the Normandy coast, Monet created a truly modern masterpiece.