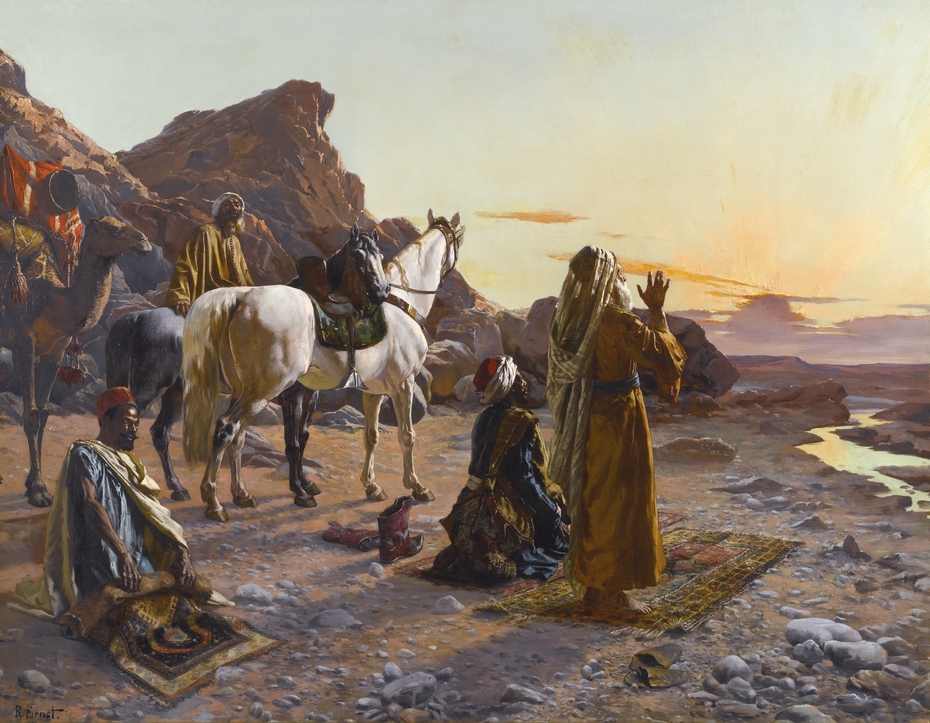 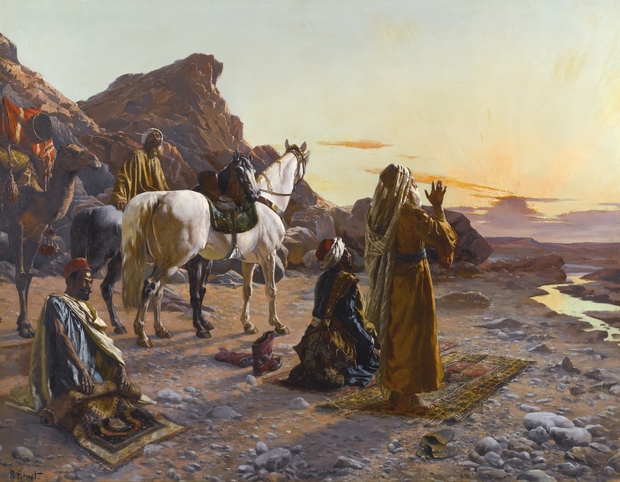 Scenes of prayer frequently form an important subject within the works of Orientalist artists. In Prayers at Sunrise, Ernst concentrates on the central theme of Muslim worship.The leading figure on the right is begining his prayers in the pose of takhbir, standing on his prayer mat facing Mecca, his hands raised and invoking God (see lot 12). His two companions are, however, presented at different stages of the ritual. Astride his horse his fellow worshipper to the left is presented sitting upright in a brief moment of reflection before the sujud or prostration, during which the forehead is reverently placed to the ground. Behind these two, a third figure is shown rolling up his prayer mat, denoting the conclusion of prayer. Ernst shows the various stages which constitute the Muslim act of prayer within his representation, whilst traditionally in sessions of worship the series of motions occur at the same moment, being intended to coordinate the congregation in the act of worship.

After studying at the Vienna Academy, Ernst travelled to Rome and, in the 1880s, to Spain, Morocco, and Tunisia. Later travels would take him to Egypt and, in 1890, to Turkey. In 1876, Ernst settled in France, exhibiting regularly at the Salon de la Société des artistes français and eventually taking French nationality. After starting out painting portraits and genre scenes, from 1885 Ernst turned exclusively to painting Orientalist subjects, which he worked up from the sketches, photographs, souvenirs, and memories accumulated during his travels. Almost all his paintings were executed in his studio in Paris, which he decorated in an eclectic Eastern style, and in which he would paint wearing a taboosh, the better to transport himself mentally into the world created in his canvases.

The present work formerly belonged to one of New York's magnificently decorated theatres, the Brooklyn Paramount, described in The New York Times' account of the sale of its contents in 1964 as the 'Palace of Splendour' (22 November 1964). The theatre's decoration also included John Frederick Lewis's Courtyard (Hosh) of the House of the Coptic Patriarch, Cairo (lot 90, Sotheby's New York, 8 November 2012).
Source

License:
All rights reserved. Exhibited on USEUM with the permission of the rights owner.
For more:
http://www.sothebys.com/en/auctions/ecatalogue/2014/orienta…