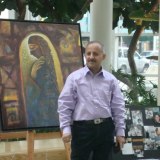 Divided between two cultures, it has been two decades ago since I came from India back to Yemen. Yemen has always inspired me since 1985 especially the old city of Sanaa where I have been painting views and veiled women. The rich history and culture of Yemen allowed me to work with Queens and women of this beautiful country.

Since I studied arts in the “Government College of Art and Craft” in Calcutta, India still remains my first love as I have been among the contemporary Indian artists who inspired me, to name a few Ganesh Pyne, Ganesh Haloi, Sunil Das, M.F. Husain and many others. My works are influenced by the “Kolkutta Modern Art Group”.

There is still so much to do and I am always feeling that I am still at the beginning. I have worked with several mediums like oil-acrylic, mixed media and water colour. I work as an eclectic artist and I don´t like to stick on one medium for a longer time. Since Yemen has only a hand full of artists and not much has been done here yet in Contemporary Art, I am still working with different mediums and techniques to create varieties of artworks.

These are my recent works on canvas, mostly untitled, but women remain the major subject in my abstract compositions, sometimes combined with fragments from the old city of Sanaa.
more >
12