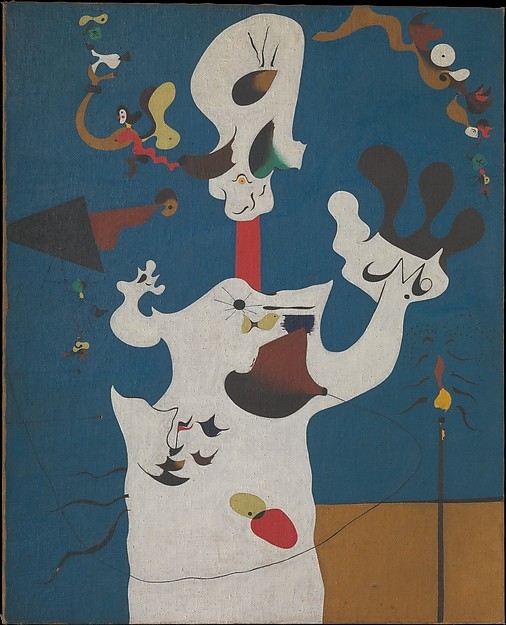 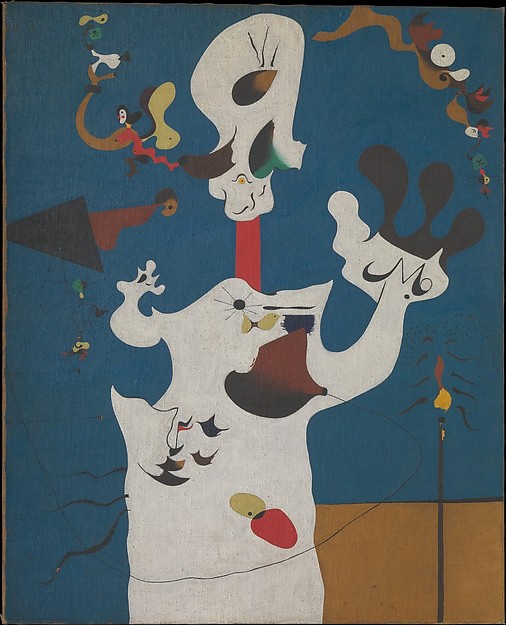 1928
Born in the Spanish province of Catalonia, Joan Miró was deeply influenced by his country's native landscape and artistic heritage. Although he was associated with French Surrealism and its practitioners and lived in Paris during the early part of his career, he returned to settle in Spain after World War II. This deliberate remove from the center of the art world is symptomatic of Miró's independence, a temperament that would mark his art as well as his life. Drawing on the possiblilities of free invention encouraged by Surrealism, Miró developed a style that drew from highly personalized and psychological references. Often beginning with a recognizable starting point, Miró transformed his subjects through whimsical color and free play with form.

"The Potato" is emblematic of Miró's poetic riffs on reality. It takes as its subject a gigantic female figure who stretches her arms wide. She is set against a blue sky and above a patch of earth—perhaps a potato field. The billowing white shape of the figure is attached to a red post in the center of the composition like a scarecrow on a pole. Miró surrounded his merry "potato-earth-woman" with fanciful decorative objects, some of which are "earthy" and some not. The figure has one brown-and-black breast that "squirts" a long, black, winding thread, as elfin creatures flutter in the sky around her. At the left, a red and yellow "butterfly-woman" takes flight from her brown banana-like nose as other creatures climb a ladder—one of Miró's favorite motifs. Beyond the earthiness of the subject, the painting's title appears to be derived from the representation of an actual, recognizable potato: lodged in the woman's forehead is a small, brown, oval object with three tendrils growing out of its upper edge. (Source: The Metropolitan Museum of Art)

Size:
39 3/4 x 32 1/8 in. (101 x 81.6 cm)
Medium:
Oil on canvas
License:
All rights reserved by the Metropolitan Museum of Art. Exhibited on USEUM for Scholarly use.
For more:
http://www.metmuseum.org/collection/the-collection-online/s…