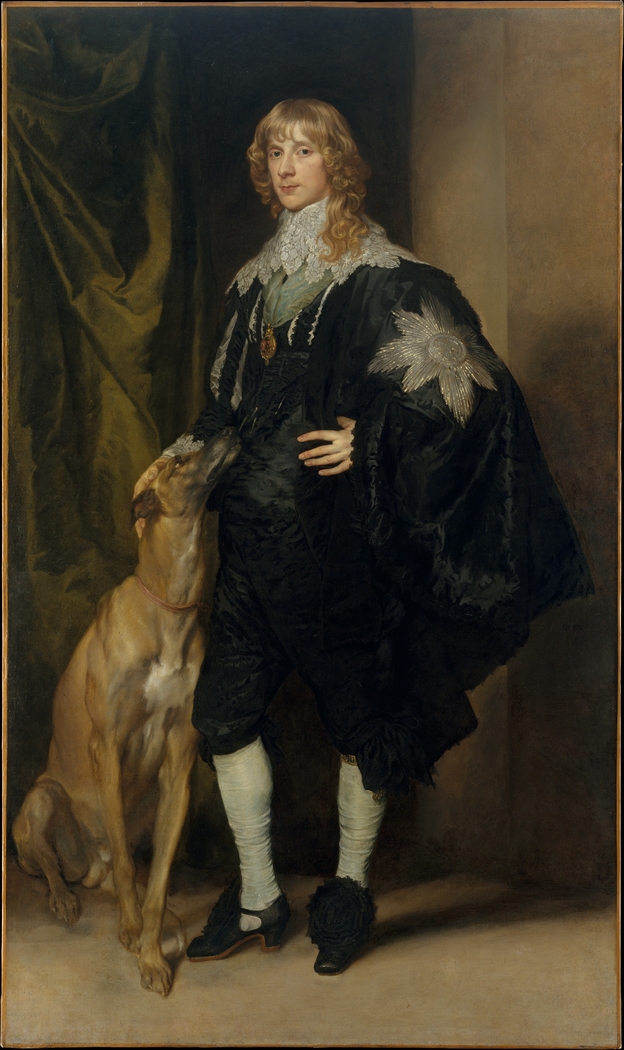 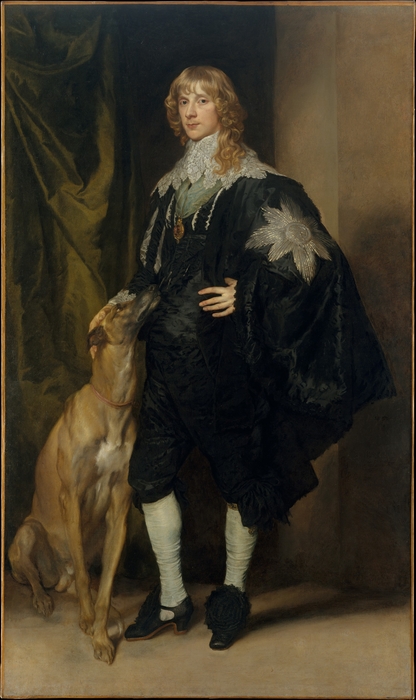 Portrait of James Stuart, Duke of Lennox and Richmond

1633 - 1635
Van Dyck depicts the Duke of Richmond and Lennox—an intimate friend of King Charles I—as a paragon of aristocratic self-possession and nonchalance. With a blonde lovelock spilling over his lace collar, the duke wears the insignia of the Order of the Garter, England’s highest order of chivalry; the portrait may commemorate his investiture in November 1633. The greyhound resting its muzzle on the duke’s hip alludes to the virtue of loyalty as well as the noble pastime of the hunt.

James Stuart was a loyal supporter of his cousin Charles I and served in high posts at court, such as Gentleman of the Bedchamber and Lord Steward of the Household. He was installed as Knight of the Garter on November 6, 1633, and in 1641 was created Duke of Richmond. When he married the Duke of Buckingham’s daughter, Mary Villiers, in 1637, the king gave the bride away. During the 1640s Stuart contributed large sums to the royal cause in the Civil War; both his younger brothers (the subjects of Van Dyck’s superb full-length double portrait, of 1638, in the National Gallery, London), the Lords John and Bernard, died fighting for the king, in 1644 and 1645.

This portrait is one of the most brilliantly painted of Van Dyck’s English portraits, and probably dates from late 1633 or early 1634. The Order of the Garter’s insignia are conspicuously displayed: the silver star on the mantle; the red and gold Jewel, or lesser George, suspended from the broad green ribbon on the chest; and the garter, visible below the bow at Stuart’s left knee and set off by the pale green silk stocking. The greyhound is a familiar symbol of nobility and of loyalty, but it rarely conveys these virtues so naturally as here, nor could the graceful dog’s pose and place in the composition serve the focus on the subject more effectively. In 1631 Van Dyck included a dog differently posed, but to similar effect, in his portrait of the Antwerp merchant Jacques Le Roy (Museo Thyssen-Bornemisza, Madrid), and a greyhound stares at Richmond in the broad portrait of him seated, of about 1636, at Kenwood House, London. Ultimately these and other dogs in Van Dyck portraits, but especially this one, recall Titian’s Charles V with a Hound, of about 1533 (Museo del Prado, Madrid), which was then in Charles I’s collection.

The portrait was one of thirty-seven European paintings given to the Museum in 1889 by Henry Marquand, who became the institution’s second president in that year.

License:
Courtesy of the Metropolitan Museum of Art
For more:
https://www.metmuseum.org/art/collection/search/436252