1895
A young woman reclines on a tiger skin on a marble ledge while her companion teases her with a dress pin. They are dressed in diaphanous robes fashioned after chitons worn by women in ancient Greece. Another dress pin and the reclining woman's hair ribbon lie scattered on the marble floor.

For over half a century after the continued excavations of Pompeii began in 1748, artists were fascinated with Greek and Roman life. John William Godward painted many scenes like this one of idealized beauties in calm, often sterile environments. In this painting, the figure of Repose is arranged seductively, with her breast and nipple showing through the thin material of her dress. But there is something distinctly untouchable about these women; they do not engage the viewer with an inviting gaze nor solicit personal contact. Like their antique setting, they possess a monumental, marmoreal quality, resembling Greek statues frozen in time. 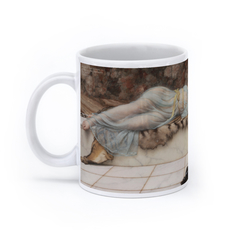