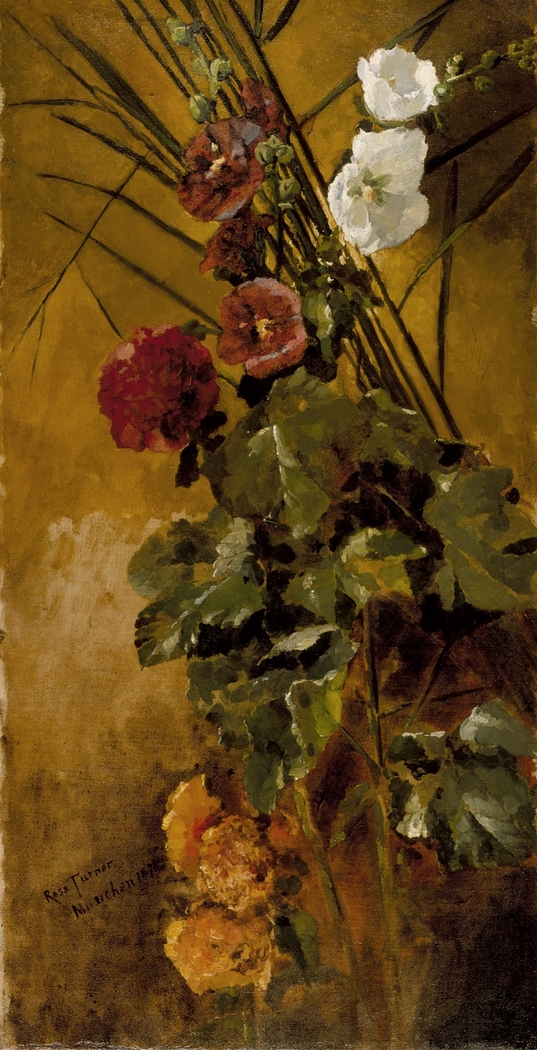 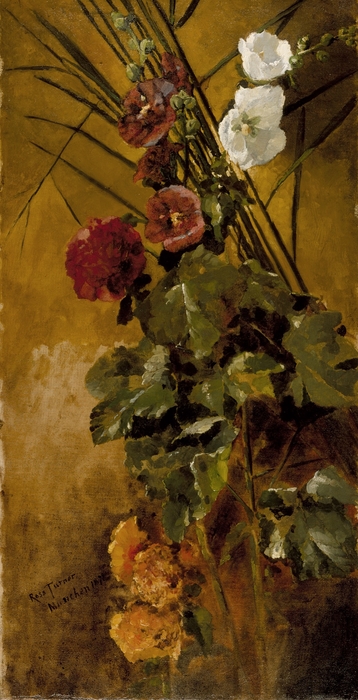 1876
Notes from the curator:
Few paintings from Turner’s Munich period are known. Turner’s mentor in Europe, Currier, was the most active still-life painter among the Americans in Munich and may have inspired Turner to attempt to work in that genre. Turner sent two still-life paintings from Munich to the Society of American Artists’ annual in 1880. Of those known today, closest to the museum’s paintings is Still Life with Swords, 1880 (with Child’s Gallery, Boston), which bears the inscription "Munich 80." Although more finished, it shares the warm background and extremely oblong format of Hollyhocks and its concentration of incident at one end of the painting. In an article on composition in 1896 (The Art Interchange 36 [February 1896]: 34) Turner praised oriental art, and Japanese motifs had appeared in his work by the mid-1880s. Although a consciousness of Japanese design is not generally associated with Munich in the 1870s, Hollyhocks’ narrow, vertical format and flat, decorative arrangement of leaves and flowers against a lighter, somewhat golden background suggest that Turner was already aware of Japanese art and decorative concerns. The unfinish of the roughed-in lower half of the canvas also anticipates the tendency to simplification and reduction, which is seen-and was commented upon-in Turner’s later still, life compositions. However, decorative, vertical still-life paintings with light backgrounds by the Austrian artist Hans Makart (1840-1884) are known. One of the outstanding students of the Munich academy in the 1860s, Makart continued to exert a strong influence on decorative painting in Munich even after his removal to Vienna. [source]