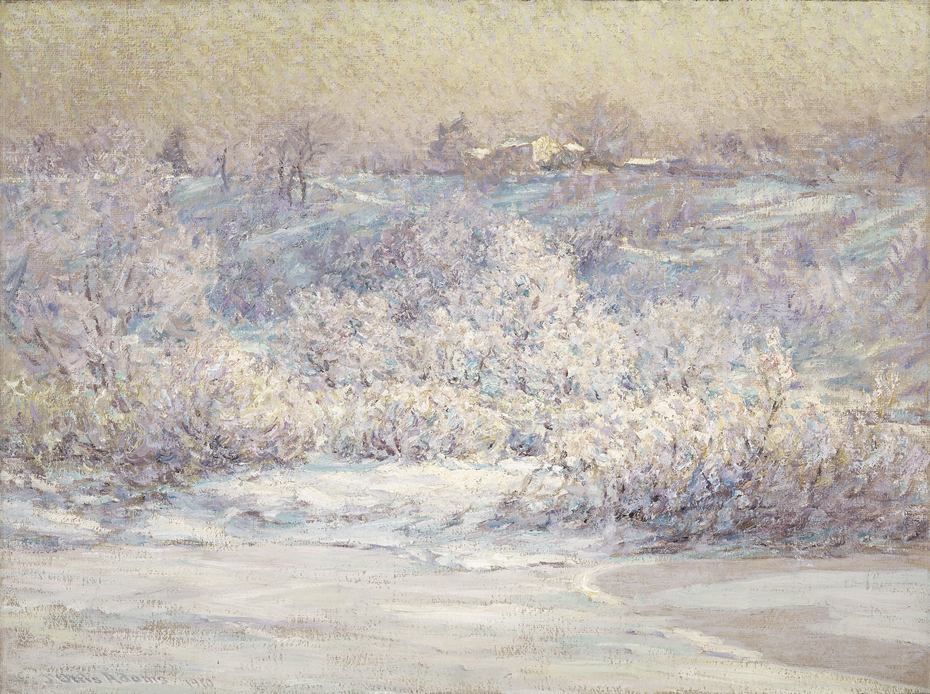 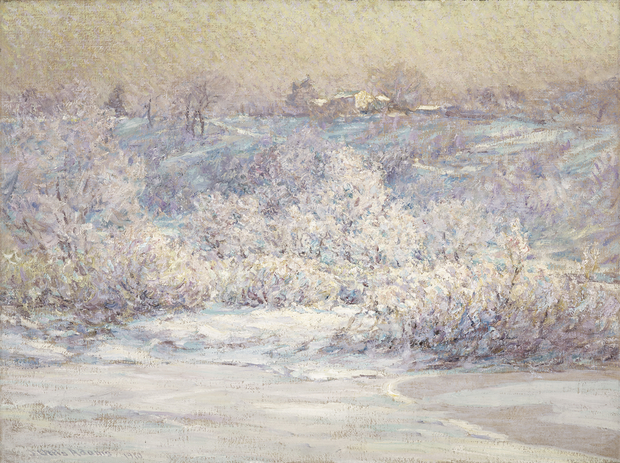 1910
J. Ottis Adams was born in Amity, Indiana and settled with his family in Shelbyville, Indiana. The young Adams was fascinated with art and spent much of his time drawing. He enrolled in Wabash College but left a year later to study art at the South Kensington School in London where he came under the influence of John Constable and Joseph Mallord William Turner, whose landscapes were of particular interest to Adams. He returned to Indiana and settled in Muncie. In 1880, Adams traveled to Munich to study at the Royal Academy with fellow Indiana artists Theodore Clement Steele and Samuel Richards. Adams studied drawing and painting at the Academy and then set up his own studio in Munich. When he returned to Indiana in 1887, Adams set up a studio in Muncie and began teaching art classes. In 1889, he and fellow artist William Forsyth opened the Muncie Art School, which lasted two years. Adams participated in a group show of Hoosier artists that traveled from Indianapolis to Chicago. A critic dubbed the artists in the exhibition The Hoosier Group. Two years later, Adams, Forsyth and Steele along with other artists in the area, formed the Society of Western Artists, the first organization dedicated to promoting the work of the region’s artists. In 1898, Adams and T. C. Steele purchased a house in Brookville, Indiana later known as the Hermitage. In 1901, Adams became one of the first teachers at the newly built John Herron Art Institute where he taught from 1902 to 1906. During the latter part of his life, Adams worked in Florida and Michigan as well as Brookville.

In December of 1907, Adams won a $500 prize at the annual exhibition of the Society of Western Artists for A Winter Morning. He continued painting winter scenes and was awarded another prize at the International Exhibition of Fine Arts held in Buenos Aires for his composition, Frosty Morning. The richly textured canvas is dominated by a snow-covered landscape and the frozen Whitewater River. Its violet tonality and use of reflected color and light are typical of the Impressionist technique. Even on the coldest January day in Brookville, Adams could work in comfort, looking out from his studio window at The Hermitage.

Size:
22 x 29-1/4 in
Medium:
Oil on canvas
License:
Public Domain, Courtesy of the Indianapolis Museum of Art
For more:
http://collection.imamuseum.org/artwork/55894/