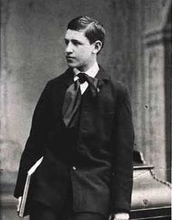 Albert Gottschalk was born in Stege on the island of Møn. but later moved to Copenhagen. He was educated at the Royal Danish Academy of Fine Arts from 1882 to 1883 and under Peder Severin Krøyer at the Artists Studio Schools from hos from 1883 to 1888. He also studied privately with Karl Jensen and Karl Madsen.[1]

Gottschalk was inspired by the Danish painter P.S. Krøyer as well as French art.

Gottschalk was ambitious, technically skilled, and he worked a long time with his motifs in his mind before painting them. He searched for his motifs in Denmark on his bicycle, and he found them often around Copenhagen. The paintings often look like they are quickly made sketches which was not recognised in Gottschalk’s time. But today people find his works fresher and more timeless than art from that time normally is.