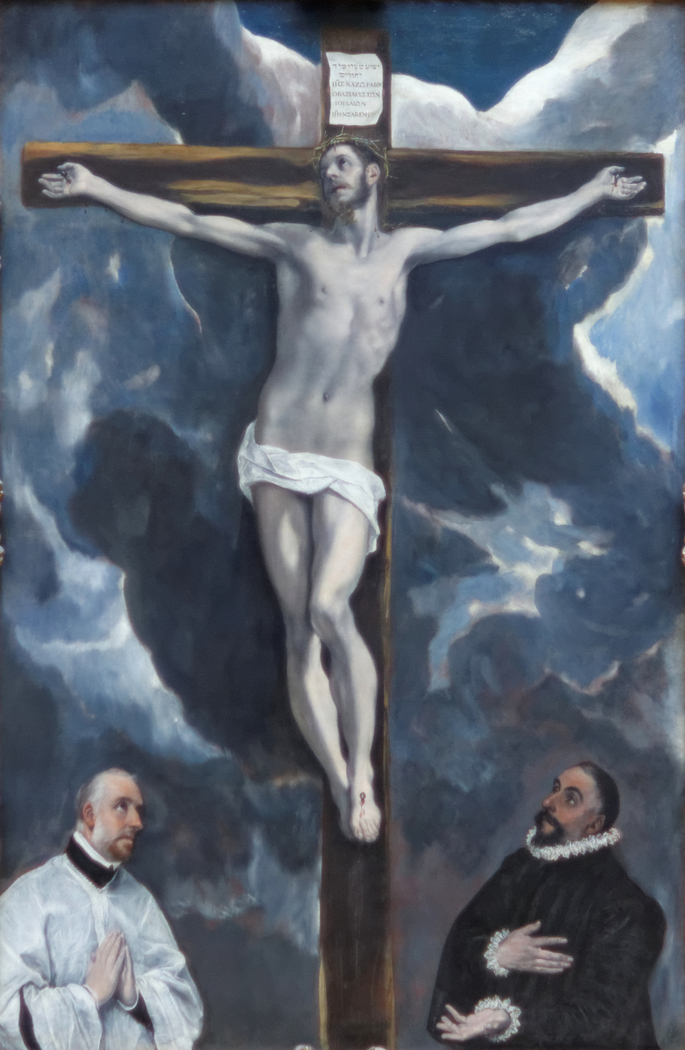 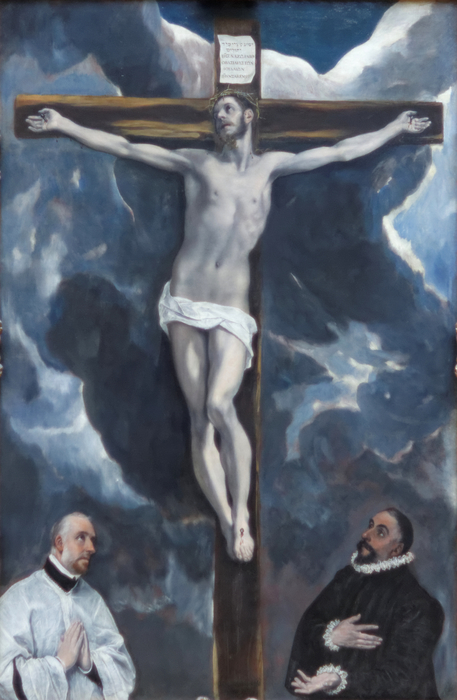 Christ on the Cross Adored by Donors

1590
Christ is dying on the Cross, which stands out against a stormy sky. El Greco broke with tradition by placing two of his contemporaries, whose physical features he was fond of depicting, at the foot of the cross instead of the Virgin and Saint John. One of the figures, whose identity remains unknown, commissioned him to paint this devotional picture for a convent in Toledo. Christ's twisting body and the swirling clouds are trademarks of the painter's mannerist style.
A highly original Crucifixion
Jesus is dying on the Cross, gazing upward at His Father. He stands out against a stormy sky symbolizing the darkness that befell the world when He died. El Greco painted portraits of two contemporaries at the foot of the cross. One is an ecclesiastic wearing a surplice, the other a layman dressed in a dark coat and a ruff. Both are praying and looking up at Christ. The artist depicted this famous episode from the Gospels in a highly original way. The base of the cross is not shown; nor are the Virgin and Saint John, who are customarily seen there. There is no landscape either. In this way El Greco focuses more attention on Christ than he does in other Crucifixion scenes. This painting was located above the altar where the Savior's death is commemorated during the Eucharist. The two half-length portraits appeared at the same level as the priest's eyes, reminding him to pray for them. In conformity with the Church authorities' Counter-Reformation recommendations, here the artist turned the historic scene of Christ's death into a devotional painting. El Greco and his studio often took this subject as their theme after 1600.
The painter of Toledo
One of the two figures depicted at the foot of the cross commissioned El Greco to paint this canvas for a side chapel in the convent of the Hieronymite nuns in Toledo circa 1590. His identity is shrouded in mystery. El Greco had come to the Spanish city in 1577 and lived there until his death in 1614. Born in Crete, he first went to Venice, where he spent time in Titian's studio, then Rome. He was attracted to Spain by the building of the Escorial palace but failing to win the favor of the king of Spain, Philip II, concentrated on his patrons in Toledo.
El Greco's mannerism
Christ's torso is elongated and twisted in the mannerist style and seems to be rising heavenward. In his post-1600 Crucifixion paintings, which feature an exaggerated mannerism, El Greco gave Christ an even longer body. In this picture, its volume and modeling have reached a degree of perfection that El Greco seldom attained in other works. The two donors have small heads and long faces, physical features dear to El Greco. The swirling clouds, which are trademarks of his expressionism, seem to echo Christ's twisting body. Shadow and light help to achieve the scene's dramatic, mystical mood. The painter used cool colors - dark blue, green, gray, and white - in keeping with the event depicted. El Greco seems to have painted this picture rapidly.