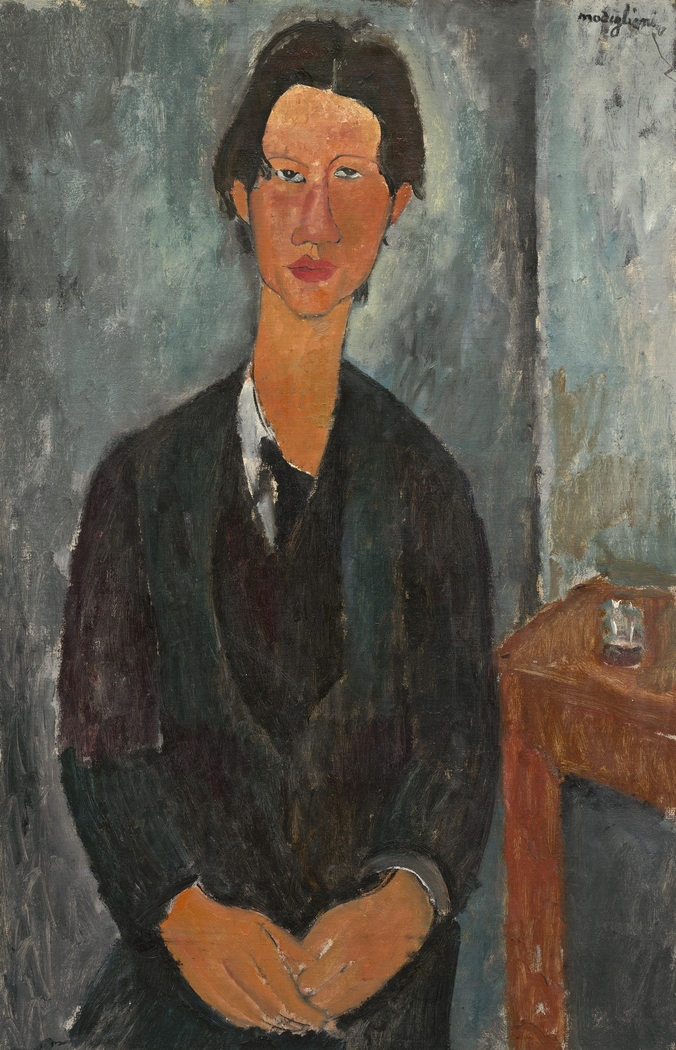 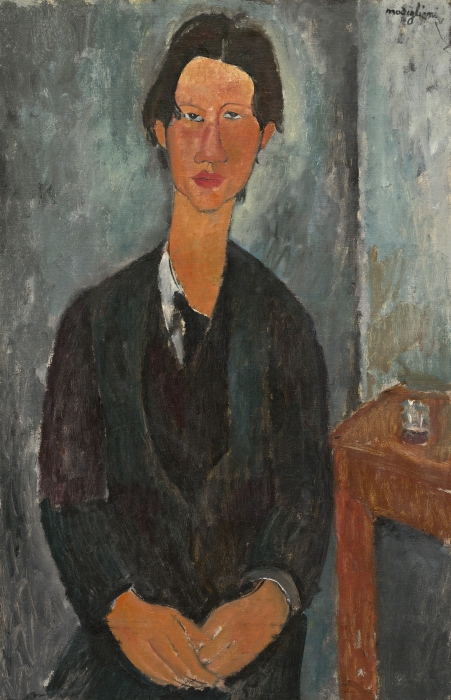 1917
Born in 1884 to an aristocratic family in Livorno, Italy, Amedeo Modigliani settled in the Montmartre neighborhood of Paris in 1906 and began making paintings influenced by both the mood of Picasso's Blue period and the pictorial structure of late Cézanne. In 1909 he met Constantin Brancusi and began to focus on sculpture; the thin features and references to African art in the series of stone heads of 1909–1914 clearly reflect Brancusi's influence.

As both painter and sculptor Modigliani concentrated on portraiture. Though he abandoned sculpture in late 1913 or early 1914 to return to painting, the long necks and attenuated features of his sculptures continue in his later painted portraits. Modigliani is also renowned for a series of languorous nudes, some of which he exhibited in 1918 at the Galerie Berthe Weill in Paris; the exhibition was closed by the police on the grounds of obscenity. Modigliani died of tubercular meningitis, aggravated by drugs and alcohol, in a Paris hospital in 1920.

The 11th child of a Russian Jewish tailor, Chaim Soutine (1894–1943) was rescued from poverty and abuse by a rabbi who recognized his talent and sent him to art school—first in Minsk, then in Vilna. Soutine arrived in Paris at the age of 17 in 1911–1912 and met Modigliani in Montparnasse in about 1914. They developed a close friendship, and Modigliani painted Soutine's portrait several times. Soutine's unruly, spontaneous manner of painting was alien to his Italian friend, who, to describe his own state of drunkenness, once quipped, "Everything dances around me as in a landscape by Soutine." The elegant Modigliani felt protective of the uncouth Soutine, 10 years his junior. In 1916 Modigliani introduced his friend to his dealer, Leopold Zborowski, and urged him to handle Soutine's work, which he began to do. Shortly before Modigliani died, he told Zborowski, "Don't worry, I'm leaving you Soutine."

While many of Modigliani's portraits are either stylized and impersonal—with eyes often left blank—or almost caricatural, this painting seems to be both particular and sympathetic. Soutine sits with tumbling hair and ill-matched clothes, his hands placed awkwardly in his lap, his nose spreading across his face as he stares out of the frame. The half-closed eyes, one slightly higher than the other, might suggest Soutine's despair and hopelessness, attitudes with which Modigliani could identify as a poor artist in Paris. Modigliani's treatment of Soutine may also reflect the special place that Soutine had won in the older artist's affections. 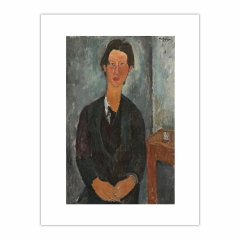