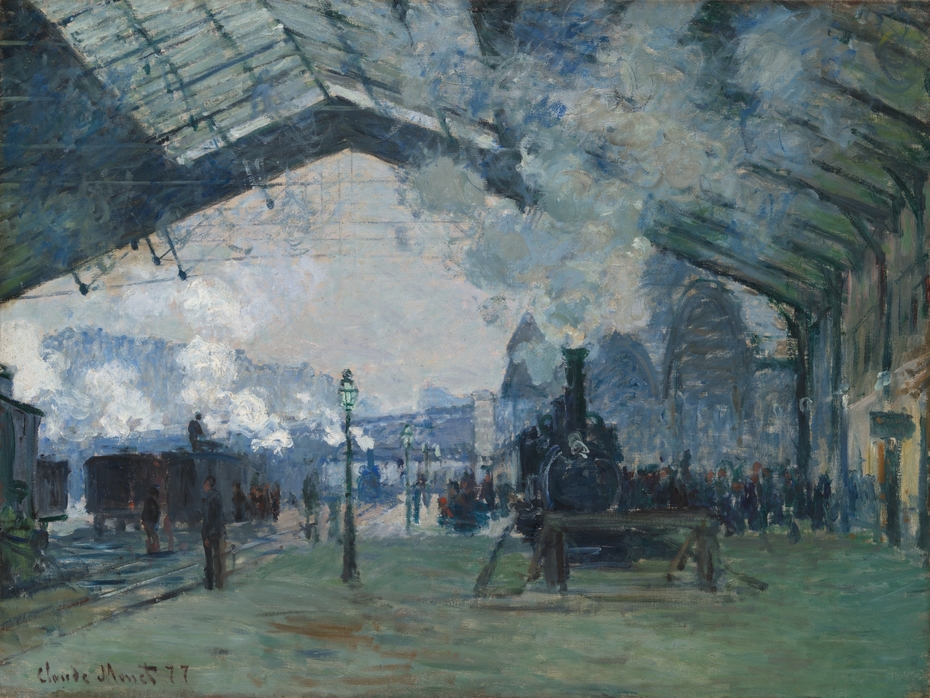 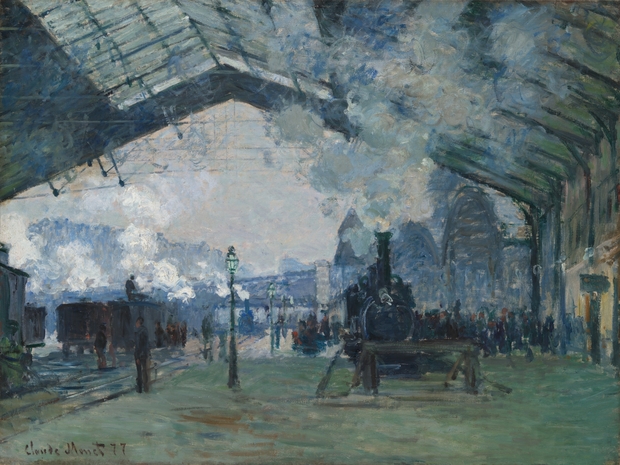 1877
The Impressionists frequently paid tribute to the modern aspects of Paris. Their paintings abound with scenes of grand boulevards and elegant, new blocks of buildings, as well as achievements of modern construction such as iron bridges, exhibition halls, and train sheds. Arrival of the Normandy Train, Gare Saint-Lazare was an especially appropriate choice of subject for Claude Monet in the 1870s. The terminal, linking Paris and Normandy, where Monet’s technique of painting outdoors had been nurtured in the 1860s, was also the point of departure for towns and villages to the west and north of Paris frequented by the Impressionists. Monet completed eight of his twelve known paintings of the Gare Saint-Lazare in time for the third Impressionist exhibition, in 1877, probably placing them in the same gallery.

Monet chose to focus his attention here on the glass-and-iron train shed, where he found an appealing combination of artificial and natural effects: the rising steam of locomotives trapped within the structure, and daylight penetrating the large, glazed sections of the roof. Monet’s depictions of the station inaugurated what was to become for him an established pattern of painting a specific motif repeatedly in order to capture subtle and temporal atmospheric changes. But the series also represented his last attempt to deal with urban realities: from this point on in his career, Monet would be largely a painter of landscapes. (Source: Art Institute of Chicago)

The Gare Saint-Lazare was the largest and busiest train station in Paris. Early in 1877, with help from his friend Gustave Caillebotte, Claude Monet rented an apartment in the nearby rue Moncey and began the first of 12 canvases showing this icon of modernity. He displayed seven of them, including this one, at the third Impressionist exhibition, in April of that year. Legend has it that he arranged to have the standing locomotives stoked with extra coal so that he could observe and paint the effects of belching steam—dull gray when trapped inside the station, white and cloudlike when seen against the sky. Read more...