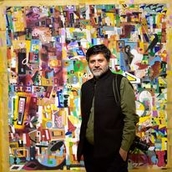 THE INTERNAL QUEST ,
Tera Pinjara Jangaal Ney Khana ,
Mian Mithu Urh Jana.
(Your cage will be eaten by rust
Mian Mithu( the parrot ) will fly away )
For Madan Lal, hailing from Punjab, the land of great mystic tradition of “Sufism”, the words of this Punjabi folk- lore, resonated in his conscious and made him embark on a journey of self introspection. Hence it comes as no surprise that through his creative expression as an artist, he translated it on his canvas in the latest series “The Internal Quest”, 2013.
His works are a kaleidoscope of life experiences that always find their space in some nook or corner of his composition. Reflective of his growth not only as an artist, his works are a narration of a personal inner journey and spiritual growth. Each canvas is like a narrative story, attracting visually at the first glance, but when looked at more closely it requires an attentive mind, to understand many interwoven aspects and elements, that could range from mundane life to a spiritual seeking. It is interesting to watch the Bull, a symbol of power and virility, an element that has been dominating his previous series, start to merge in the background. Instead,”Parrot” epitomizing “Soul”, makes its presence felt very gently amidst complexity of life. In his present series, the Human face representing “Self “is in dichotomy between the material and spiritual worlds. His work titled “Mirage’, depicts the man who has turned into an ascetic, after breaking away from the world of materialism that is chasing him as a bird. He seems desperate to search the reflection of self, in the blue water below. Interestingly, Madan leaves it to the viewers to follow the quest and find the answer to the reflection that eludes like a mirage.
Though deeply Philosophic in content, pertaining to purpose of life and its finality, Madan’s works are without any melancholic effect and are rather visually very appealing. Despite having travelled internationally, he has remained rooted to his heritage and has been deeply inspired by the tradition of colourful embroidered fabric, “Phulkari”, which has left a deep impact on him from his childhood days in Punjab. Just as is done in Phulkari, he has woven the life philosophy, except in his case it is on the canvas painted with a myriad of colours.A thought provoking series, ‘The Internal Quest’ is the beginning of a journey that Madan has embarked upon. It seems like the beginning of a self-introspection by the artist and reminds one of the words by Kahlil Gibran –
Whenever I come to the fountain to drink
I find the living water itself thirsty.
more >
13