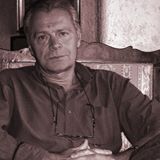 Zamfir Dumitrescu was born on 15th April 1946 in Bucharest, Romania, to a family of intelectuals. His parents lived at the time on Caimatei Street, in an old part of the town, not far from the University of Bucharest. They later moved to Cotroceni, not far from the Opera House, where the artist lives to this day.

His mother, Margareta (born Eckert), was half austrian (by her father Francisc Eckert) and half swiss (by her mother Clara Filk). Margareta was trained in classical music and showed artistic talent and she later studied and graduated from the Academy of Physical Education and Sport in Bucharest.

His father, Dumitru Dumitrescu, was a true scholar. He graduated from the University of Bucharest, with degrees in Mathematics, Law, Literature and Philosophy and at the same time he obtained an engineering degree from the Polithechnics Institute in Bucharest. He then studied aeronautics and electrical engineering in Paris, graduating from the École Nationale Supérieure de l'Aéronautique et de l'Espace and also from École Supérieure d'Électricité. A PhD followed in Gottingen in the field of fluid mechanics. He was elected member of the Academy of Romania, where he served as General Secretary between 1963 and 1967, and was associate member of the Academy in Toulouse.

Zamfir Dumitrescu studied at the renowned "Spiru Haret" College in Bucharest and then chose to dedicate himself to the fine arts, in particular to painting. He recalls asking his father for advice choosing between engineering and painting; the great scholar let him choose for himself but added "an ordinary engineer, maybe even a stupid one will find work, whereas nobody has any need for an ordinary artist".

It is during his years as student, as pupil of master Corneliu Baba, that Zamfir choses painting as his way of life, his tool for exploring and understanding life.

An important moment in the artistic devlopment and personality of Zamfir is represented by the time spent in Norway over a period of 15 years and where he felt like home. In this period, he painted and exhibited in both Norway and Sweden. The honour of being chosen to paint the portraits of members of the Norwegian and Swedish royal families demonstrates that, in the homeland of Grieg and in the
homeland of Strindberg, he was adopted without reserve and apreciated for his art.

Artist, painter, university professor doctor, member of parliament, Zamfir Dumitrescu is above all one of the finest representatives of culture in Romania, a true intellectual - fifth generation as demonstrated by his family tree continuing in his quest for perfection.
more >
9