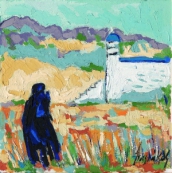 Georges Pastakas was born in Florina in 1956. He studied painting in Royal Academy of Fine Arts. He also creates religious icons using the byzantine method. Reference to his work in the Dictionary of Greek Artists.