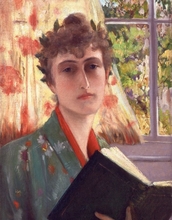 Winnaretta Singer, Princesse Edmond de Polignac (8 January 1865 – 26 November 1943) was a musical patron and heir to the Singer sewing machine fortune. Born in America, she lived most of her adult life in France.

Winnaretta Singer was the twentieth of the 24 children of Isaac Singer. Her mother was his Parisian-born second wife, Isabella Eugenie Boyer. Winnaretta was born in Yonkers, New York. After the American Civil War, the Singer family moved to Paris, where they remained until the Franco-Prussian War. The family then settled in England, first in London, and then to Paignton, Devon where they moved to Oldway Mansion a 115-room palace built by her father. [source]
more >