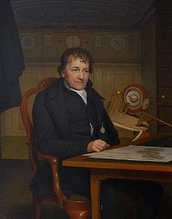 Willem Bartel van der Kooi (1768-1836)
Willem Bartel van der Kooi was born in Augustinusga in Friesland, into a prominent, affluent family. At twelve, he was apprenticed to a local firm of painters and decorators. He developed his talent as an artist more or less independently. He specialised in portraiture, although he also produced genre paintings. The French neo-Classical style clearly influenced his work. Van der Kooi taught numerous pupils and his impact on painting in Friesland in the 19th century was considerable.

Image: Eise Eisinga (1827)
After winning a prize for genre painting in 1808, his work was in constant demand. In 1818, Van der Kooi was commissioned to paint portraits of Willem I and his consort.
Van der Kooi’s growing reputation beyond Friesland is apparent in his appointment to various art academies in Amsterdam, Antwerp and Ghent.
more >
1