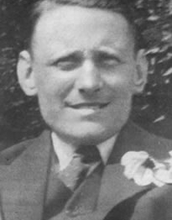 Willem Arondeus (22 August 1894 – 1 July 1943) was a Dutch artist and author, who joined the Dutch anti-Nazi resistance movement during World War II. He participated in the bombing of the Amsterdam public records office to hinder the Nazi German effort to identify Dutch Jews and others wanted by the Gestapo. Arondeus was caught and executed soon after his arrest.

Arondeus was openly gay before the war and defiantly asserted his sexuality before his execution. His final words were "Let it be known that homosexuals are not cowards".

Early life
Willem Johan Cornelis Arondeus was born in Naarden, as the youngest son of an Amsterdam fuel trader. His parents were Hendrik Cornelis Arondeus and Catharina Wilhelmina de Vries. He started working as an illustrator, designer of posters and tapestries and a painter. In 1923 he was commissioned to paint a large mural for Rotterdam City Hall. During that same period, he illustrated poems by J. H. Leopold, Pieter Cornelis Boutens and Martinus Nijhoff. He admired the older Dutch designer Richard Roland Holst, as can be seen in his work. He did not attain much fame and lived in impoverished circumstances.

Around 1935, he gave up visual arts and became an author. The poems and stories he had written in the 1920s went unpublished, but in the year 1938 he published two novels, Het Uilenhuis ('The Owls House') and In de bloeiende Ramenas ('In the Blossoming Winter Radish'), both illustrated with designs by Arondeus himself. The year 1939 saw the publication of his best work, Matthĳs Maris: de tragiek van den droom ('The Tragedy of the Dream'), a biography of the painter Matthijs Maris, who was a brother of the Dutch artists Jacob and Willem Maris. Two years later, Figuren en problemen der monumentale schilderkunst in Nederland ('Figures and Problems of Monumental Painting in the Netherlands') was published, again with designs by the author. At that date, however, Arondeus was already involved with the Dutch resistance movement.

Resistance movement
In the spring of 1941, Arondeus started an underground periodical in which he tried to incite his fellow artists to resist the Nazi occupation of the Netherlands. Earlier than others, Arondeus realized that the demand by the Nazi occupiers that all Jews register with the local authorities was not, as the Nazis claimed, for their own safety, but rather so they could be deported to the Westerbork concentration camp and from there to the death camps in occupied Poland. In the spring of 1942, Arondeus founded Brandarisbrief, an illegal periodical in which he expressed the artist’s opposition to the edicts imposed by the Reichskulturkammer (Reich Chamber of Culture), the Nazis' cultural committee. In 1943, Brandarisbrief merged with De Vrije Kunstenaar ("The Free Artist"), where sculptor Gerrit van der Veen was one of the editors. Together with composer Jan van Gilse, openly lesbian publisher and writer Tine van Klooster and her partner, publisher Koos Schregardusand, sculptor Frits van Hall and his sister, dancer Suzy van Hall, and a number of other artists and intellectuals, the group called for mass resistance against the German occupation.

A concerted operation was underway to hide Jews among the local population, with various underground organizations preparing forged documents for Jews. Arondeus was a member of one such group, Raad van Verzet (Resistance Council), which also included openly lesbian cellist and conductor Frieda Belinfante and typographer Willem Sandberg, who was then curator at Amsterdam's Stedelijk Museum.[3] Within a short while, the Nazis began to expose the false documents by comparing the names with those in the local population registry. To hinder the Nazis, on 27 March 1943, Arondeus led a group in bombing the Amsterdam Public Records Office. Thousands of files were destroyed, and the attempt to compare forged documents with the registry was hindered. Within a week, Arondeus and the other members of the group were arrested. Twelve, including Arondeus, were executed that July by firing squad.[1] In his last message before his execution, Arondeus, who had lived openly as a gay man before the war, told his lawyer: "Let it be known that homosexuals are not cowards!"

Legacy
In 1945, after the liberation of the Netherlands, Arondeus was awarded a posthumous medal by the Dutch government and was reburied in Erebegraafplaats Bloemendaal. In addition, in 1984, he was awarded the Resistance Memorial Cross. Further, on 19 June 1986, Yad Vashem recognized Arondeus as Righteous Among the Nations.