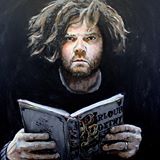 British artist Will Teather is well-known for creating artworks that combine an unusual imagination with a mastery of traditional skills. The artist's paintings and drawings often depict curious characters caught up in extraordinary situations. Lifting motifs from diverse sources such as Flemish still life, religious baroque art and Weimer painters, the artist enters into direct conversation with the history of painting with the aim of bringing some thing new to the table.

Having studied at Central St Martins and Chelsea College of Art & Design, his studio is currently based in Norfolk. Teather spent over 3 years as the Artist-in-Residence for the Anteros Arts Foundation, based in their Bergh Apton venue and subsequently Norwich. In summer 2012, as a recipient of the Ruth Katzman Scholarship, he travelled to New York, USA, to join The Vytlacil Campus Artist-in-Residence Program. His paintings and drawings have previously featured in venues including London's Colomb Art Gallery, The Mall Galleries, Gallery No 9 in Marciac, Norwich's Art 18/21, Edinburgh's Open Eye Gallery, Aberdeen Art Gallery, RH Gallery New York and Oxfordshire's Modern Artists Gallery. He has thrice been a finalist in Mayfair's "Cork Street Open Exhibition," and was short-listed for the international "Celeste Prize" 2009. His artwork has been widely showcased in publications including The International Drawing Annual, Artists and Illustrators, The Artist Magazine and The Antiques Trade Gazette. He has also written art criticism and articles on technique for award-winning books and magazines.

Teather's work is held in a number of notable collections in the UK and overseas. Work has been acquired by Matthew Bourne (choreographer/director), Peter Stephen (Lord Provost of Aberdeen), the Aude Gotto Collection, The Wolterton & Mannington Estate and The Modern Artist's Gallery. Commissioners for projects include Arts Council England, the City of Aberdeen (under curatorial care of Aberdeen Art Gallery and Museums), Norfolk County Council and Ana Silvera (singer),

The artist first came to public attention in Spring 2007, when he was selected from international applications to spearhead the new artist-in-residence programme at Aberdeen Arts Centre. The research undertaken during this period helped to nurture the narrative concepts which underpin his current body of work:

"In the spirit of magical-realist fiction, the storytelling explores the indefinite space between reality and fiction, horror and humour, fantasy and fact. Vaudevillian characters inhabit a play without beginning or end, where carnival and folk traditions are pastiched together into simulacrum and spectacle. As with Angela Carter's novels, the carnivalesque elements of transgression and excess allow illusion to work and the improbable to become possible."

The artist's paintings and drawings have featured many real performers. Guest appearances have been made by theatre groups such as Les Enfants Terrible, Hocus Pocus Theatre, plus the singers Ana Silvera and Andrew Plummer. The visual artist and performer Dot Howard is also a recurrent muse within the works. In 2010, Teather collaborated with members of the art collective Other Other Other to create a performance themed around gallery etiquette, performed at the Sainsbury Centre for Visual Arts. This was followed by a performance in 2011, conceived by Teather and developed in collaboration with the performer Holly Bodmer titled "The Reappearance of The Remarkable Disappearing and Reappearing Maudeline Spacks." The event was subsequently awarded an Arts Council England grant for it's re-staging as part of Norfolk and Norwich Festival's 2012 Beta Programme.

The artist has lectured on drawing courses at The University of Arts London, Leeds College of Art & Design and more recently Norwich University College of the Arts. His workshops have featured in the Times Educational Supplement and, in 2008, he was awarded a college staff award, in recognition of his contribution as a demonstrator for the college's Drawing Workshop.

He is currently co-founding The Chelsea Collective, an international art group made up of postgraduate alumni of Chelsea College of Art and Design.
more >
23