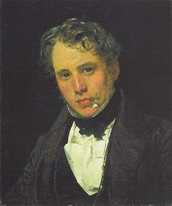 Wilhelm Marstrand (1810-1873)
Marstrand was among C.W. Eckersberg’s students and was, as the only one, very interested in narrative and illustrative painting. Marstrand worked with genre painting, literary subjects, portraiture and, in later years, history painting. He was frequently employed as a portraitist and painted a series of portraits of members of the Hage family, among others. Marstrand travelled throughout his life in the larger European countries such as Italy, France, Germany and England. He was particularly fascinated by Italy, where he stayed for several years. From here, he became a major producer of peculiar, touching, and often humorous or ironic depictions of the Italian folk life that so fascinated him.