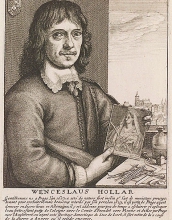 Hollar was a skilled etcher, developing his style in Germany and travelling to work in England with the Earl of Arundel in 1636. He often depicted landscapes and maps, and his works include several views of London. In the 1640s, Hollar moved to Antwerp, but later returned to England in search of patronage. One of Hollar's other accomplishments is his copy of Hans Holbein the Younger's famous Dance of Death series.