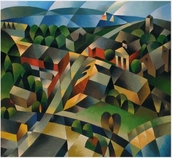 Born in Milan, Italy, in 1941, Vittorio Canta grew up surrounded by the rich cultural history of his homeland.
At an early age, he demonstrated his innate talent for visual arts that was to shape his future career in the field of graphic design. Following his studies, Vittorio went on to become a highly sought-after graphic designer in Italy's dynamic advertising industry.
Seeking new adventures and greater challenges, he moved to Montreal where he began a long and successful career creating, designing and producing visual communications material. In 2001, Vittorio settled down in the picturesque town of Quebec's Eastern Townships.
Today, he devotes his full time to painting, hikes with his dog and continues his love affair with the sport of bicycling, a passion nurtured during his early youth.
Defined as 'Divisionism', his art is a synthesis of coloured segments that generate mnemonic connections in each keen observer. While Vittorio’s paintings are calculated compositions that reach deep in the subconscious of the viewer, they leave plenty of latitude to interpretation.
more >
17