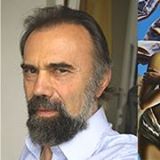 Born: July 22, 1948, Lupeni/Hunedoara, Romania
I have been interested in drawing and painting since youth, and had a rigorous arts education.I have been much influenced by the Flemish, Dutch, Italian, Spanish, and French great masters. I saw in their multi-faceted work multiple windows toward the absolute. Then Dali showed me what kinds of possibilities dwell within the domain of the "real" and what the artists can make of it. After a time of experimenting in several directions such as cubism, constructivism, and abstractionism and using various techniques, I came back to the kind of painting that best expresses who I am. I have always dreamed of painting this way, finding means to capture the passing and evanescent nature of reality through forms that transcend it. Traditional Indian philosophy claims that "life is a dream," underscoring an invisible boundary that separates different worlds from each other and therefore the respective "realities" that correspond to them. There is something in each "reality" that transcends its physical immediacy taking the form of a projection or emanation, thus outgrowing its deterministic corset and finding its "super-reality" at a higher level. I believe my textual "Painting as performance representation" opens the door towards understanding this."Painting as a form of performance"As shape is the child of space, it purifies in the light and dresses in the shadow of the unusual. The unknown appears changed by the form of the well-known, invited to the party of the ephemeral shapes. The game of light and shadows opens the door to the world of polar reality which is continuously betraying its initial state by flirting with its opponent. Within this scene of dialectical caprice, the vacation taken by the shape, translated in its desire for resting is nothing but its wish to rise in order to be born again in the triumphant aspect of the eternal golden age. An age which is meant to head for the identification with the unforgettable state which it valiantly once left behind. The eternal is pulsating as if it were the obvious, inviting the spectator to attend the ritual through which reality is leaving the chest of its own bias in order to return to the Paradise it had once known. Curtains concealing the magic of the world surrender in front of the brave ego, explorer of virgin territories. He is chasing himself in the eternal merry-go-round movement of Cronos, as if he were to reach himself from behind and going beyond his own being. It is the mysterious route of Magellan's clouds, sailing on indefinite spaces, living in the cadence of eternity where the tune of the suspending pendulums accompany the song of the drifting sand on the shore of the ephemeral rediscoveries. In the polyphonic torment of a dialectical world, the omniscient silence of the statues is nothing but the unwritten music of the spheres. The eye is the stage of a performance where the director becomes his own actor in order to overpass the barrier at the end of the night, thus encountering the world as a piece of poetry. The unambiguous is saying goodbye to its own context, accepting the invitation to the never started travel whose destination will be the ultimate knowledge.
more >
8