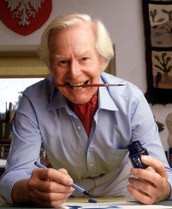 Norman Antony "Tony" Hart (15 October 1925 – 18 January 2009)
British television presenter Tony Hart began exhibiting a noticeable talent in drawing when he was just a young boy. Even in the austere atmosphere of England in the 1930s and '40s, Hart's school teachers noticed his abilities and encouraged him to study art. In 1944, the 19 year old left school to join the military, serving with the British Indian Army, which he served with until the end of World War II.
Following the war, the young veteran returned to school and studied at the Maidstone College of Art. After graduating in 1950, Hart began working as a professional artist, and in 1952, he attended a party where an acquaintance suggested he employ his talents on television. The acquaintance, who turned out to be a producer at the BBC, offered Hart an interview in which the young artist proceeded to draw a picture of a fish on a napkin without having to look at his work. Hart subsequently became the resident artist on the TV series Playbox, and would go on to appear on many shows over the next 50 years, such as Titch and Quackers, Vision On Take Hart, Hartbeat, Artbox Bunch, and Smart Hart, frequently appearing along a stop-motion animated character named Morph.
Hart regularly featured art submitted by his young viewers on his shows, and received two BAFTA awards over the course of his career. He remained married to his wife Jean Skingle from 1953 until her death in 2003, and the two had one daughter. Hart passed away in 2009, at the age of 83. ~ Cammila Collar, Rovi
source