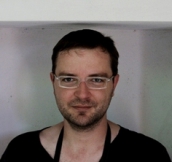 Tolis Tatolas (born in Greece in 1978) currently lives in Athens where since 2005, he works as a spatial designer (interior, exterior and stage) and visual artist.
He studied Biology at the Faculty of Sciences of the Aristotle University of Thessaloniki (1996-2002) and in Vakalo College of Art and Design - University of Derby (2005-2008). Meanwhile he worked on classical singing under Aris Christofellis and studied the use of human voice in experimental and contemporary music.
His writings include a book ("The Animals in the Homeric Age", Erodios Publications, 2005) and the participation in an English collective treatise, titled "Science and Technology in Homeric Epics", (ed. Springer Publications, 2008). His new title is to be released soon under the name : "clinical neurophysiology and visual arts: Hieronymus Bosch and Frida Kahlo». He has also published the following works: "Love and Death in German Romantic Opera and post romantic period (Richard Wagner and
Richard Strauss)","Nietzsche and education" and “Abandoned Places – Architectural Photography Set I” (black and white abstract architectural photographs, Grey) .
As a visual artist, he did five personal exhibitions and participated in 16 group exhibition in Greece, Great Britain and Austria.
In the frame of his artistic collaborations one should mention his work with the record company "Seirios" (Greece, 2008), the music producing company "Migrant Sound" (London, 2010) and The University of Cyprus and the Utopian Studies Society (Nicosia, 2011).
Among others, on scenery and costume design, he designed the staging of Jean-Paul Sartre's "Huis Clos", Jean Genet's “Les Bonnes”, both at the George Armenis New Greek Theater, Fyodor Dostoyevsky's "Notes From the Basement", at Athens Megaron, Yukio Mishima's "My Friend Hitler" and David Hare's "The Juda's Kiss", both at Aggelon Vima Theater and Yannis Ritsos' "Ismene", at En Athinais Theater.
Tolis Tatolas creative orientation is towards a holistic approach to aesthetics in a frame of unity of all arts.
more >
9