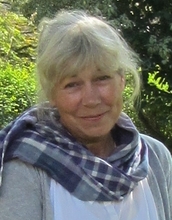 Painted using the medium " Distempera" ( pure pigment and size) (plus gouache and casein at times ) on paper, it has a very matt quality and the colours are very fine. The pigments come from a variety of sources , metals, chemicals, the earth and stones. I buy mine from Corneillisons of London which is a cross between an old fashioned sweet shop and a very ancient chemist.

Distempera is related to tempera where the pigment is mixed with egg or some other binder,it is also likened to fresco painting where the pigment is painted into wet plaster. It is a water-based medium with a matte surface. It has been used throughout history, for example, by Renaissance painters Mantegna,Raphael and Leonardo and schools of, for the underpaintings or cartoons for frescos. Distempera was also occasionally used by Matisse and most beautifully by the French painter Édouard Vuillard (1868-1940)
more >
13