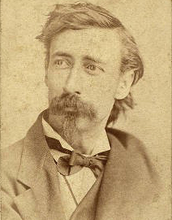 Theodore Clement Steele (September 11, 1847 – July 24, 1926) was an American Impressionist painter known for his Indiana landscapes. Steele was an innovator and leader in American Midwest painting and is considered to be the most important of Indiana's Hoosier Group painters. In addition to painting, Steele contributed writings, public lectures, and hours of community service on art juries that selected entries for national and international exhibitions, most notably the Universal Exposition (1900) in Paris, France, and the Louisiana Purchase Exposition (1904) in Saint Louis, Missouri. He was also involved in organizing pioneering art associations, such as the Society of Western Artists.

Steele’s contributions were recognized with honorary degrees from Wabash College in 1900 and Indiana University in 1916. In addition, Steele was elected to an associate membership in New York’s National Academy of Design in 1913.
more >
18