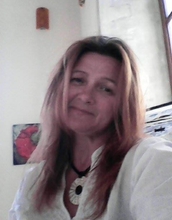 I born 1969 in Poland. Since 1990 lives in Crete, Greece. Until 1993 I works in the workshop of Peter Evagielidis in Athens as a painter and designer.
Attended painting and art history courses at the School of Fine Arts Borgias in Athens. From 2008-2014 I worked as a painter at the Fine Arts Workshop of the Municipality of Ierapetra in Crete. In 2010 becomes a member of the artistic committee at the National Competition pictures online with theme “Child, poverty and social exclusion”.In 2011 illustrates children’s book “I want to remember” the publisher MYSTIS in Heraklion collaborative I.Kritsotaki under the auspices of UNESCO. I have performs murals in public and private spaces. I takes part in many group and private exhibitions.

My works are in many private and public collections in Greece and abroad.
more >
4