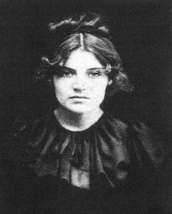 Suzanne Valadon (23 September 1865 – 7 April 1938) was a French painter who was born Marie-Clémentine Valadon at Bessines-sur-Gartempe, Haute-Vienne, France. In 1894, Valadon became the first woman painter admitted to the Société Nationale des Beaux-Arts. She was also the mother of painter Maurice Utrillo.

Valadon spent nearly 40 years of her life as an artist. The subjects of her drawings and paintings, such as Joy of Life (1911), included mostly female nudes, portraits of women, still lifes, and landscapes. She never attended the academy and was never confined within a tradition.

She was a model for many renowned artists. Among them, Valadon appeared in such paintings as Dance at Bougival (1883) and Dance in the City by Pierre-Auguste Renoir (1883), and Suzanne Valadon (1885) by Henri de Toulouse-Lautrec.