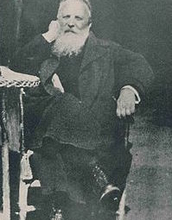 Stanisław Masłowski (1853–1926) was a Polish painter, born Stanislaw Stefan Zygmunt Ludgard Masłowski (3 December 1853 in Włodawa,[1] – 31 May 1926 in Warsaw) – Polish painter of realistic style, the author of genre scenes and landscapes.

Stanisław Masłowski, was born on 3 December 1853 in Włodawa on the Bug River (present day Poland), and there was christened 8 May 1854. His certificate of baptism is stored in the archives of the Parish of St.Louis of Pauline Fathers in Włodawa. He came from an impoverished noble family (Samson coat of arms), which originates from Wieluń (Poland) . "Masłowski" family used the nickname "Watta of Ruda" (Polish: "z Rudy"). Zygmunt Gloger in his "Historic geography of ancient Polish lands" (Polish: "Geografia historyczna ziem dawnej Polski") repeats after Jan Długosz, that the first capital of Wieluń County was Ruda before Wieluń, which was more conveniently located. Masłowski was the son of Rajmund Masłowski and Waleria Józefa of Danilewicz. His brother was Bolesław Masłowski, chemist (1851–1928). Masłowski's grandfather from his mother, Wincenty Danilewicz, (Ostoja coat of arms, born in 1787 in Mińsk Lit. – former Polish–Lithuanian Commonwealth territory), was involved – as light-cavalryman – in the Napoleonic campaign, for which he was awarded the French Order of Legion of Honour.[5][6] Masłowski's father was a lawyer. He was promoted several times, changing with his family place of residence.

Włodawa, place of birth of the future artist – was one of many towns where his father was employed. Masłowski family moved in 1856 from Włodawa to Garwolin, where Rajmund served as a courtroom writer. In 1858–1865 Maslowski lived in Chęciny. It is worth noting that Rajmund Masłowski in January Uprising was the head of the Chęciny district. Therefore, in mid- 1864 he was arrested, and then about six months he spent in prison in Kielce.

Since 1865 Masłowski lived in Kalisz, where his first drawing teacher in the local high school, was painter Stanisław Barcikowski, a graduate of Warsaw School of Fine Arts. During this period, Masłowski drew a lot from nature, including between 1865–1871 in Bronów near Poddębice at a father's friends – Maria and Jarosław Konopnicki (see story by Konopnicka: "How do children in Bronów with Rozalia entertained", where one of these "children" was "Staś" – the future artist; and then in Jędrzejów, where lived Wincenty Danilewicz, his grandfather. He was also copying Juliusz Kossak's pictures from illustrated magazines.