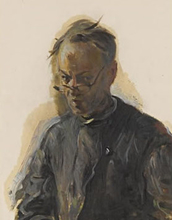 Solomon Nikritin was born in Chernihiv, Ukraine (then part of the Russian Empire).

In 1914–1917 he studied under the painters Leonid Pasternak and Alexander Jakovlev in Moscow and in St. Petersburg.

In 1916 he participated in an exhibition of contemporary art in Moscow.

In 1917 Nikritin returned to Kiev and studied in the studio of Aleksandra Ekster.

In 1920-1922 he studied at the Moscow Higher Artistic-Technical Workshops (VKhUTEMAS).

In 1922 Nikritin participated in the First Russian Art Exhibition in the Gallery van Diemen in Berlin together with Kazimir Malevich, Alexander Archipenko, Aleksandra Ekster, El Lissitzky, Nathan Altman and others.

In 1922 he participated in the founding of the group, the Projectionists, together with Kliment Red'ko and Tishler among others.

From 1923 to 1924 he together with Red'ko developed theories of Electroorganism and Luminism.

In 1923 Nikritin was co-founder of the experimental stage, Theatre of Projectionism in Moscow.

He was a head of the Poly-Technical Museum in Moscow.

From 1931 he was a member of the association Isobrigade.