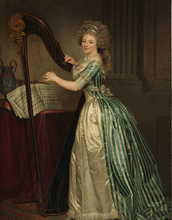 Ducreux first exhibited at one of Pahin de la Blancherie's bi-weekly exhibitions, known as the Salon de la Correspondance, in 1786. This self-portrait in pastel, the location of which is currently unknown, depicted the artist in the act of painting. Her self-portraits often included musical and artistic attributes.

A self-portrait of Ducreux seated at a piano-forte, c. 1785 and formerly part of the Erlanger Collection, was misattributed to Jacques-Louis David for a long time, as were other works by her. Work by Decreux has also been misattributed to her contemporaries Antoine Vestier and Élisabeth Vigée Le Brun. In her brief career, Ducreux exhibited at a number of important exhibitions beginning in 1786 and continuing until 1799, including the January 1786 Salon de la Correspondance. Ducreux made her debut at the Louvre Salon in 1791, for which she submitted a portrait of a young woman and a life-size, full-length self-portrait in which she is depicted playing the harp; the latter oil on canvas is now in the collection of the Metropolitan Museum of Art, though many of her works remain untraced today. She never signed her work. As with many women artists in the eighteenth century, Ducreux paints herself with an object of accomplishment, the harp, rather than her painterly tools in the fashion of her male counterparts.

In 1802 Ducreux moved to Saint-Domingue, where she married the maritime prefect, François-Jacques Lequoy de Montgiraud. She died shortly after of yellow fever.


Ducreux adopted the Rococo style in her work. The colors in her portraits were very light and gentle to the eye. These portraits were also asymmetric, often having the subject pose and stare off to the side while they seem to be doing something.

Self-Portrait with a Harp Created in 1791. Painted in oil on canvas. Dimensions 76 x 50 ¾ in (193 x 128.9 cm).[6] This work has been identified with a self-portrait that Mademoiselle Durceux exhibited at the Paris Salon of 1791. The portrait was made around the time of the French Revolution, so to some, it may seem odd that the painting depicts such a luxurious garment at a time when the population of France revolted against luxury and totalitarianism. However, the painting represents the transitional time of 1791; having the luxury of fabrics contrast the simplicity of the background.

Portrait of Diane de la Vaupaliere Created in 1790. Painted in oil on canvas. Shows a portrait of a lady seated before a harp and reading some books. The major color of the painting is brown, and compared with it, the lady in white looks like an angel. The painting gives people a peaceful feeling and is now in the collection of the Nelson-Atkins Museum of Art.